The Chairman of the Joint Chiefs has a message for those who wear and have worn our country's uniform: "We are not elected to serve; rather, we elect to serve." 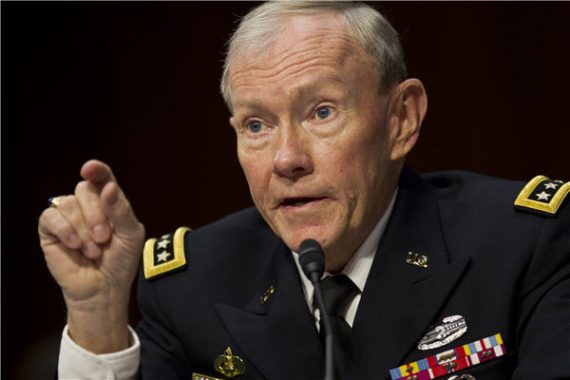 The Chairman of the Joint Chiefs has a message for those who wear and have worn our country’s uniform: “We are not elected to serve; rather, we elect to serve.”

Using the uniform for partisan politics erodes the trust the American people have in their military, Army Gen. Martin E. Dempsey said today.

During a discussion with reporters aboard a C-17 returning from Afghanistan and Iraq, the chairman of the Joint Chiefs of Staff addressed a question about a group of Navy SEALs who have put together a political action committee.

Dempsey has been outspoken that service members have truly earned their right to vote, and that all Americans are entitled to private and personal opinions.

But, the chairman said, he and his fellow members of the Joint Chiefs of Staff are the stewards of the profession of arms, and must ensure service members don’t cross an important line.

“One of the things that marks us as a profession in a democracy is it’s most important we remain apolitical,” he said. “That’s how we maintain our trust with the American people. The American people don’t want us to become another special interest group. In fact, I think that confuses them.”

Dempsey said he believes partisan groups made up of former service members cloud the issue as well. “If someone uses the uniform for partisan politics, I’m disappointed in that,” he said. “I think it erodes that bond of trust we have with the American people.”

The chairman noted he has expressed this opinion before on his blog, and he said he has had incredible conversations in the blogosphere on the subject. He also discussed this soon after a young Army reservist appeared in uniform at a campaign rally, he said.

“We must understand why our military as a profession embraces political neutrality as a core value,” he wrote in his blog in June. “We show fidelity to the Constitution every day by embracing this foundational principle. We are not elected to serve; rather, we elect to serve.”

And maintaining this bond of trust between the American people and its military is key to the survival of both, the chairman said. The American people trust that the professional military will remain out of partisan politics, he added. The U.S. military does not stage coups to topple governments and place their own in charge, he said, and the American military is justifiably proud of serving the Constitution and following the orders of elected leaders.

“We’re not a profession simply because we say we’re a profession,” Dempsey wrote in a letter to the joint force upon assuming office as the nation’s top military officer last year. “We must continue to learn, to understand, and to promote the knowledge, skills, attributes and behaviors that define us as a profession.”

This is a lesson that was drummed into me starting from my first days as a cadet—amazingly, more than a quarter century ago now—but one that seems constantly in danger of being overrun. The military, and especially its officer corps and special operations community, sees itself as a Praetorian Vanguard that’s more noble, ethical, and American than the citizens they serve. And, increasingly, our politicians and the citizenry themselves agree. That’s not a good thing.

I commend to your attention, as I have many times over the years, Charlie Dunlap’s “The Origins of the American Military Coup of 2012.”  [PDF] Written two decades ago as a paper by the then-Air Force colonel as a student at the National War College, it still holds up remarkably well.

Less humbly, I’d recommend my own May 2011 essay for The American Conservative, “Military Service is a Job, Not a Duty.”