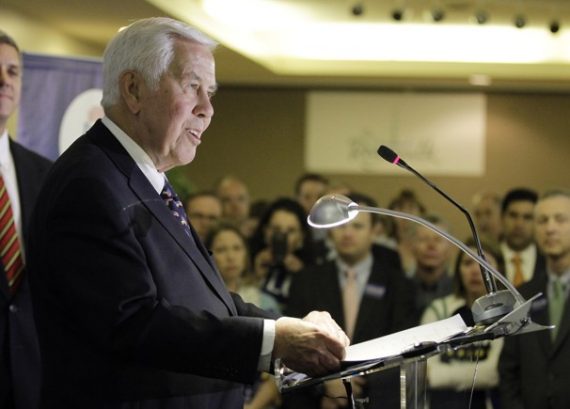 In “Why Dick Lugar lost,” Chris Cillizza and Aaron Blake argue persuasively that the Tea Party was not the primary factor in the loss of the six-term senator.

At its heart, Lugar’s defeat was attributable to the fact that he broke the political golden rule: Never lose touch with the people who elected you.

“A strong majority of GOP primary voters felt that Lugar had served too long and was too old and should retire,” said Christine Matthews, a Republican pollster who conducted several bipartisan surveys in the state. “Three-fourths of voters supporting Mourdock said their reasons centered around Lugar’s longevity, age, and lack of residency.”

Matthews added that less than one in five voters in her last poll were supporting Mourdock for what she described as “tea party talking points” including Lugar’s vote to confirm Elena Kagan to the Supreme Court or his support for the Troubled Asset Relief Program (TARP) bailout.

Look at Marion County, which includes the city of Indianapolis (where Lugar was mayor in the 1970s) and is the center of establishment Republicanism in the state. Lugar only won the county by eight points — not even close to the margin he would have needed to offset Mourdock’s margins in the rest of the state.

Lugar’s campaign did nothing to help him and, in fact, reinforced the fact that he had fallen badly out of touch with Republican voters in his state.

Rather than heed the advice of national campaign professionals, who told Lugar he needed to professionalize his campaign operation, the incumbent went in the opposite direction — parting ways with respected pollster Linda DiVall and surrounding himself with Senate loyalists who knew far more about cloture than campaigns.

Lugar convinced himself that the way he was regarded in Washington — as a senior statesman — was the way he was regarded in Indiana. He cavalierly dismissed the seriousness of Mourdock’s challenge and didn’t seem to grasp the danger inherent in the extended public debate over whether or not he was even a resident of the state. He did little to counter the idea that, at 80, his time to retire had come.

I’m not a fan of the Tea Party movement or the hyperpartisan atmosphere that has surrounded American politics in recent years. And I have a lot of respect for Dick Lugar, especially for his foreign policy seriousness. After nearly four decades in Washington and at 80 years old, it was likely time for him to retire and get some fresh blood into the Senate.