“Do It For Denmark” 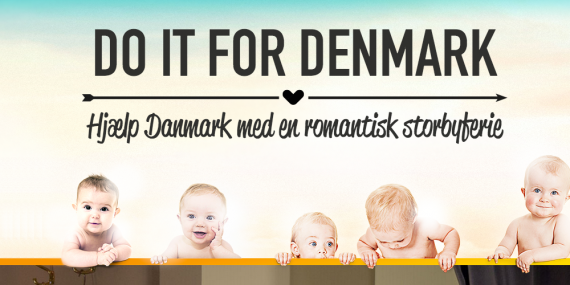 Apparently the Danes are trying to get their citizens to, well, do it:

Denmark has a sex problem. (Re-evaluating that happiness ranking already?)

Well, it’s not exactly a sex problem, per se. It’s more like a baby problem. According to government statistics, Denmark posted a birth rate of 10 per 1,000 residents in 2013 — its lowest in decades. The nation’s birthrate was  9.9 in 1983.

Denmark’s perennially low birth rate places it with Germany (8.33), Japan (8.39) and Singapore (7.72). And the downward trend has left people worried in Denmark. Most couples say they want two or three kids, according to the Copenhagen Post, but one in five couples wind up childless.

On Wednesday, a bold — and hilarious — campaign emerged in Denmark to reverse the trend. For the salvation of the country, a travel company-organized movement called “Do it for Denmark!” wants Danes to act and act now — without precautions. “Denmark is facing a crisis,” the company, Spies Rejser, says. ”We are concerned. The fewer Danes means fewer people to support the aging population — but sadly, also fewer Spies travelers.”

In reality, of course, this is a fairly clever ad campaign for a travel agency rather than a government program (and one that probably wouldn’t be considered acceptable for American television thanks to the incredibly prudish broadcast rules we have here) but, come on Danes, it’s your patriotic duty!