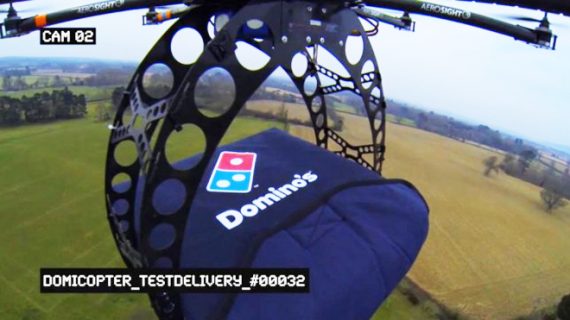 Coming soon to a neighborhood near you, the Pizza Drone:

Domino’s Pizza hired a creative agency called T + Biscuits to test the feasibility of octocopter drones that deliver a hot, delicious pizza to your doorstep.

Heavily branded as the DomiCopter, the current prototype can deliver two, large pizzas in about ten minutes within a four mile radius of the store. While future versions could hypothetically use GPS coordinates to deliver the pie, the existing model is piloted from the ground by someone experienced in drone flight.

, this type of drone is primarily used for capturing broadcast quality video with cameras like the Red Epic , Canon C300 or Sony PMW F3.

No flying permits are needed to operate the drone up to 126 meters off the ground, as detailed by NBC News

recently; only permission of the landowner is required. Other tools that can be used with the drone include on-board GPS, air pressure sensors and an electronic compass.

“If anything, it went quicker than a pizza boy,” T + Biscuits founder Tom Hatton said when asked about the feasibility of using the DomiCopter drone. “We were amazed at how easy it was going to be.” Hatton was referencing the time required to navigate roads as well as stop at red lights.

According to Hatton, other names previously batted around for the DomiCopter included the “Pepperdroney” and the “Flyin’ Hawaiian.”

I suggest the Pizza Bomber.