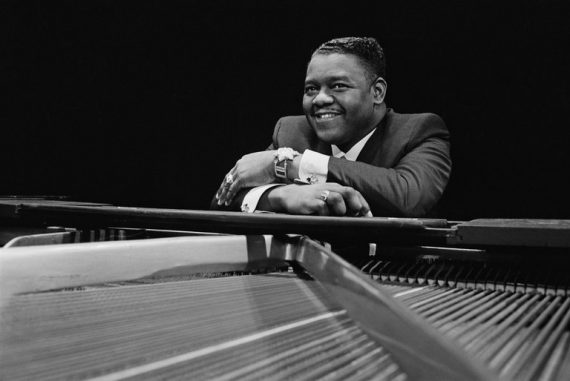 Fats Domino, one of the early pioneers of Rock & Roll, has died at the age of 89:

Fats Domino, the New Orleans rhythm-and-blues singer whose two-fisted boogie-woogie piano and nonchalant vocals, heard on dozens of hits, made him one of the biggest stars of the early rock ‘n’ roll era, died on Tuesday at his home in Harvey, La., across the Mississippi River from New Orleans. He was 89.

His death was confirmed by the Jefferson Parish coroner’s office.

Mr. Domino had more than three dozen Top 40 pop hits through the 1950s and early ’60s, among them ”Blueberry Hill,” ”Ain’t It a Shame” (also known as “Ain’t That a Shame,” which is the actual lyric), “I’m Walkin’,””Blue Monday” and “Walkin’ to New Orleans.” Throughout he displayed both the buoyant spirit of New Orleans, his hometown, and a droll resilience that reached listeners worldwide.

He sold 65 million singles in those years, with 23 gold records, making him second only to Elvis Presley as a commercial force. Presley acknowledged Mr. Domino as a predecessor.

“A lot of people seem to think I started this business,” Presley told Jet magazine in 1957. “But rock ‘n’ roll was here a long time before I came along. Nobody can sing that music like colored people. Let’s face it: I can’t sing it like Fats Domino can. I know that.

Rotund and standing 5 feet 5 inches — he would joke that he was as wide as he was tall — Mr. Domino had a big, infectious grin, a fondness for ornate, jewel-encrusted rings and an easygoing manner in performance; even in plaintive songs his voice had a smile in it. And he was a master of the wordless vocal, making hits out of songs full of “woo-woos” and “la-las.

Working with the songwriter, producer and arranger David Bartholomew, Mr. Domino and his band carried New Orleans parade rhythms into rock ‘n’ roll and put a local stamp on nearly everything they touched, even country tunes like “Jambalaya” or big-band songs like “My Blue Heaven” and “When My Dreamboat Comes Home.”

Antoine Dominique Domino Jr. was born on Feb. 26, 1928, the youngest of eight children in a family with Creole roots. He grew up in the Ninth Ward of New Orleans, where he spent most of his life.

Music filled his life from the age of 10, when his family inherited an old piano. After his brother-in-law Harrison Verrett, a traditional-jazz musician, wrote down the notes on the keys and taught him a few chords, Antoine threw himself at the instrument — so enthusiastically that his parents moved it to the garage.

He was almost entirely self-taught, picking up ideas from boogie-woogie masters like Meade Lux Lewis, Pinetop Smith and Amos Milburn. “Back then I used to play everybody’s records; everybody’s records who made records,” he told the New Orleans music magazine Offbeat in 2004. “I used to hear ’em, listen at ’em five, six, seven, eight times and I could play it just like the record because I had a good ear for catchin’ notes and different things.”

He attended the Louis B. Macarty School but dropped out in the fourth grade to work as an iceman’s helper. “In the houses where people had a piano in their rooms, I’d stop and play,” he told USA Today in 2007. “That’s how I practiced.”

In his teens, he started working at a club called the Hideaway with a band led by the bassist Billy Diamond, who nicknamed him Fats. Mr. Domino soon became the band’s frontman and a local draw.

“Fats was breaking up the place, man,” Mr. Bartholomew told The Cleveland Plain Dealer in 2010. “He was singing and playing the piano and carrying on. Everyone was having a good time. When you saw Fats Domino, it was ‘Let’s have a party!’ ”

In 1947 Mr. Domino married Rosemary Hall, and they had eight children, Antoine III, Anatole, Andre, Antonio, Antoinette, Andrea, Anola and Adonica. His wife died in 2008. A complete list of survivors was not immediately available.

In 1949 Mr. Bartholomew brought Lew Chudd, the owner of Imperial Records in Los Angeles, to the Hideaway. Mr. Chudd signed Mr. Domino on the spot, with a contract, unusual for the time, that paid royalties rather than a one-time purchase of songs.

Immediately, Mr. Domino and Mr. Bartholomew wrote “The Fat Man,” a cleaned-up version of a song about drug addiction called “Junkers Blues,” and recorded it with Mr. Bartholomew’s studio band. By 1951 it had sold a million copies.

Mr. Domino’s trademark triplets, picked up from “It’s Midnight,” a 1949 record by the boogie-woogie pianist and singer Little Willie Littlefield, appeared on his next rhythm-and-blues hit, “Every Night About This Time.” The technique spread like wildfire, becoming a virtual requirement for rock ‘n’ roll ballads.

“Fats made it popular,” Mr. Bartholomew told Rick Coleman, the author of “Blue Monday: Fats Domino and the Lost Dawn of Rock ‘n’ Roll” (2006). “Then it was on every record.”

Through the early 1950s Mr. Domino turned out a stream of hits, taking up what seemed like permanent residence in the upper reaches of the R&B charts. His records began reaching the pop charts as well.

In that racially segregated era, white performers used his hits to build their careers. In 1955, “Ain’t It a Shame” became a No. 1 hit for Pat Boone as “Ain’t That a Shame,” while Domino’s arrangement of a traditional song, “Bo Weevil,” was imitated by Teresa Brewer.

Mr. Domino’s appeal to white teenagers broadened as he embarked on national tours and appeared with mixed-race rock ‘n’ roll revues like the Moondog Jubilee of Stars Under the Stars, presented by the disc jockey Alan Freed at Ebbets Field in Brooklyn. Appearances on national television, on Steve Allen and Ed Sullivan’s shows, put him in millions of living rooms.

He did not flaunt his status as an innovator, or as an architect of a powerful cultural movement.

“Fats, how did this rock ‘n’ roll all get started anyway?” an interviewer for a Hearst newsreel asked him in 1957. Mr. Domino answered: “Well, what they call rock ‘n’ roll now is rhythm and blues. I’ve been playing it for 15 years in New Orleans.”

At a news conference in Las Vegas in 1969, after resuming his performing career, Elvis Presley interrupted a reporter who had called him “the king.” He pointed to Mr. Domino, who was in the room, and said, “There’s the real king of rock ‘n’ roll.”

Mr. Domino had his biggest hit in 1956 with his version of “Blueberry Hill,” a song that had been recorded by Glenn Miller’s big band in 1940. It peaked at No. 2 on the pop charts and sold a reported three million copies.

“I liked that record ’cause I heard it by Louis Armstrong and I said, ‘That number gonna fit me,’ ” he told Offbeat. “We had to beg Lew Chudd for a while. I told him I wasn’t gonna make no more records till they put that record out. I could feel it, that it was a hit, a good record.”

“I was lucky enough to write songs that carry a good beat and tell a real story that people could feel was their story, too — something that old people or the kids could both enjoy,” Mr. Domino told The Los Angeles Times in 1985.

For most of us, Domino and other artists such as Chuck Berry, who died earlier this year, were old-timers that you usually only heard on the “Oldies” radio stations, but they really were the guys who began what became Rock & Roll and an international phenomenon.

As always, the best way to remember people such as this is through their music: