Going from flying a real airplane to operating a drone in Alamagordo sucks. 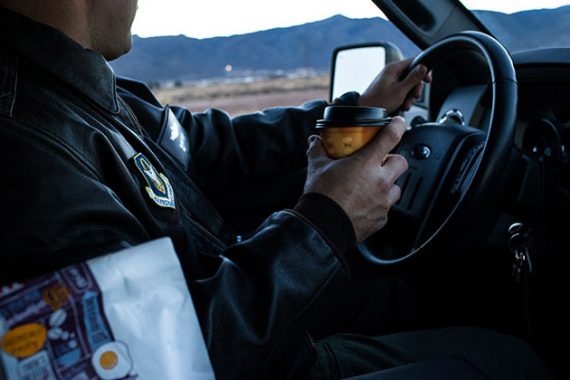 Going from flying a real airplane to operating a drone in Alamagordo sucks.

The preferred nomenclature inside the military for unmanned planes is RPA, for Remotely Piloted Aircraft. “Drone” conjures images of brainless bots on autopilot, an implication not appreciated by the three-person crew (pilot, sensor operator, intelligence analyst) typically tasked with operating the military’s high-tech workhorses.

The word drone also evokes monotony, which is what fills much of the pilots’ daily routines. Though strikes on suspected terrorists and the resulting civilian casualties get the headlines, the lion’s share of remote piloting consists of quieter, more shadowy work: hour after hour of ISR—intelligence, surveillance, and reconnaissance. Sitting in ergonomic chairs in ground control stations—essentially souped-up shipping containers—RPA operators coordinate with ground intel to identify human targets, then track them with high-powered zoom lenses and sophisticated sensors. (A nine-camera sensor nicknamed Gorgon Stare is capable of streaming full video with enough resolution to discern facial expressions.)

“It might be little things like a group of kids throwing rocks at goats, or at each other, or an old man startled by a barking dog,” says Mike. “You get a sense of daily life. I’ve been on the same shift for a month and you learn the patterns. Like, I’ll know at 5 a.m. this guy is gonna go outside and take a shit. I’ve seen a lot of dudes take shits.”

But an award or handshake can’t replace the buzz of flying at Mach speed over a combat zone. Many early recruits to the program flew jets, bombers, or cargo planes before being “asked” to transfer to drone duty under the impression they could reassign to a base of their choosing after putting in time on RPA rotations. But as demand for their new skill set increased, the timelines became moving targets. Some have been flying drones so long they would need expensive retraining to fly regular aircraft again.

“I’m overpaid, underworked, and bored,” says Ryan. “What the Air Force doesn’t get is that they can’t throw money at us to make us happy. I didn’t even know how much a pilot made when I enlisted. I just wanted to fly.” Brad, who flew a B1 bomber in Afghanistan and is now an RPA instructor at Holloman, compares it to “being transferred from marketing to the accounting department.” Ryan says pilots in their situation have taken to calling themselves the “lost generation,” and many have become resigned to the notion that if they stay in the Air Force they might never feel g-forces in a real cockpit again.

“It’s tough working night shifts watching your buddies do great things in the field while you’re turning circles in the sky doing ISR,” says Ryan. And the dusty town of Alamogordo doesn’t offer much in the way of extracurricular perks. “If we can do this job from anywhere, why can’t they just put the base in Hawaii?” wonders Mike, only half-joking.

While many of the commenters at MoJo either think these guys are immature whiners or that we shouldn’t use drones at all because it makes war easier, the real takeaway for me is to wonder why the Air Force is using trained fighter pilots to operate RPAs.  Or, indeed, commissioned officers.

The Army has its very lowest level enlisted personnel drive tanks, rocket artillery launchers, and the like. Once promoted to junior NCO rank, they stop driving and start supervising those who do. Similarly, Army helicopters—which are much harder to learn to fly than a fixed wing aircraft—are piloted by warrant officers and very junior commissioned officers. Once you make major, you move on to supervising aviation operations, doing less and less flying as your career progresses. Indeed, those who want to spend their careers flying are better off as warrants rather than commissioned officers.

Yet, the Air Force is paying field grade officers a very handsome salary—and flight pay!—to do something a kid right out of high school could not only do just as well but is likely much more psychologically suited to do. Indeed, I can scarcely conjure someone it makes less sense to assign this banal duty to than a 30-something who has spent a decade learning to fly jets.

To be clear, I’m not denigrating the work RPA pilots do. It takes skill and judgment and saves lives. But it makes no sense to spend hundreds of thousands of dollars to train someone to do an almost completely unrelated task and then make him do something comparatively boring.