Haaretz reports that the Dutch Islamists have struck back in kind, posting cartoons depicting Anne Frank and Adolf Hitler in bed.

A Belgian-Dutch Islamic political organization posted anti-Jewish cartoons on its Web site in response to the cartoons of the prophet Mohammed that appeared in Danish papers last year and offended many Muslims. The cartoons were posted on the Arab European League’s site on Saturday. It was not working Sunday morning because of exceeded bandwidth.

One of the AEL cartoons displayed an image of Dutch Holocaust victim Anne Frank in bed with Adolf Hitler, and another questioned whether the Holocaust actually occurred. Dyab Abou Jahjah, the party’s founder and best-known figure, defended the action on the Dutch television program Nova Saturday.
“Europe has its sacred cows, even if they’re not religious sacred cows,” he told the program.

Denying the Holocaust is illegal under most European hate speech laws, which outlaw intimidating or inciting hatred toward groups on the basis of their ethnic, cultural, religious or sexual identity. Complaints about alleged hate speech are common but prosecutions are rare and convictions very rare.

The AEL espouses nonviolence but has gained a reputation for extremist views, and opposes Muslims integrating with non-Muslims. It promotes the participation of Muslims in political dialogue in European countries, but is internally divided as to whether or not to participate in elections directly.

Here it is, via Jawa Report: 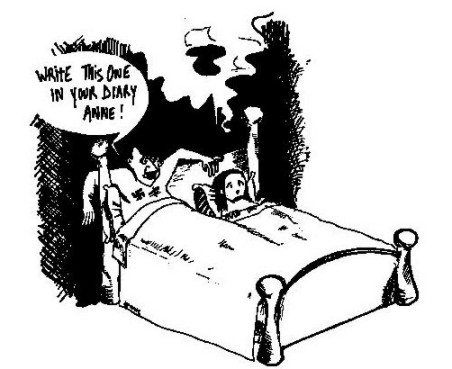 I would argue this cartoon is more offensive than any of the Dutch Mohammad cartoons that sparked the rioting and arson sprees around the world. Therefore, I expect Jews to burn down several mosques and Israel to launch a military strike on Mecca.

Well, no, I don’t. There will be some hand wringing about how disgusting the cartoon is and lots of talk. But violence? Widespread violence? Not likely.

[Update: Michelle Malkin notes, “Arab newspapers run this kind of sick propaganda all the time. And nobody riots. Nobody burns down Arab nations’ embassies. Nobody threatens to behead and massacre and annihilate the Muslim cartoonists.”]

I agree, incidentally, with Bluto that Holocaust denial laws are assinine. Speech, even hateful speech, is often illuminating. And it provides an outlet for expressing frustration that certainly beats alternatives.

See all of the images in full size at my Danish Muslim Cartoons page.

Related stories below the fold.