President Obama's approval numbers have dropped 9 points since the Egypt crisis broke out. 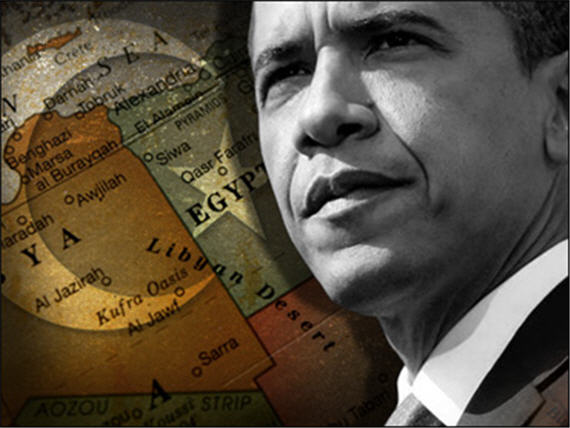 Scott Rasmussen is touting a major drop in President Obama’s approval among likely voters in the wake of the events in Egypt:

The Rasmussen Reports daily Presidential Tracking Poll for Saturday shows that 23% of the nation’s voters Strongly Approve of the way that Barack Obama is performing his role as president. Forty percent (40%) Strongly Disapprove, giving Obama a Presidential Approval Index rating of -17 (see trends).

The president’s Approval Index ratings have fallen nine points since Monday as the crisis in Egypt unfolds. Most of the decline comes from a fall in the number who Strongly Approve of the president’s performance (30% on Monday, 23% now). However, for the first time since mid-December, the number who Strongly Disapprove has moved back over the 40% mark for five straight days. The Strongly Disapprove total had been above 40% for most of 2010 but fell to the high-30s after the president and Senate Republicans reached a deal to extend the Bush Administration tax cuts.

Rasmussen’s numbers are controversial, in that they tend to skew Republican, mostly as a function of applying a “likely voter” screen even for polls having nothing to do with elections. Regardless, this is a comparison of trends within a single poll, so that’s not particularly important.  (Although, amusingly, that doesn’t stop Rasmussen from devoting several paragraphs to defending his company’s accuracy.)

What do these numbers tell us? Probably not much.

The situation in Egypt has been riveting and people who care want their president to Do Something Now. Because, after all, American presidents are in charge of deciding who runs every country on the planet and have magical powers to grant the wishes of protesters everywhere, especially if they’re fighting for freedom.

Alas, Obama is more cautious than the average president. Going back to the campaign, he went into virtual hiding whenever a crisis broke out, let everyone else stake out definitive positions, and emerged a few days later to deliver his considered opinion.  From the Russian invasion of Georgia to the financial crisis to the Afghanistan Surge to Egypt, that’s his M.O.  It’s aggravating because most of us are accustomed to an instant information world. But I don’t recall him suffering lingering damage for waiting until things settled down a bit to make a decision.

That pattern is likely to hold here. In this particular case, I happen to think he’s played it exactly right.  His first statements were cautious: insisting that the right to peaceably protest be respected, calling for democratic reforms, calling for nonviolence, but refusing to insist on an outcome.  As things turned violent, he ratcheted up the pressure. Now, he’s quietly pushing Mubarak out. While it seems like this has been playing out forever, it’s actually been only 9 days.

Ultimately, this is likely to play itself out quickly and without a lot more bloodshed. And, like Lebanon, Georgia, and Iran be quickly forgotten by the average American.

Beyond that, the “Strongly Approve” and “Strongly Disapprove” numbers  are fluctuating well within their normal range. 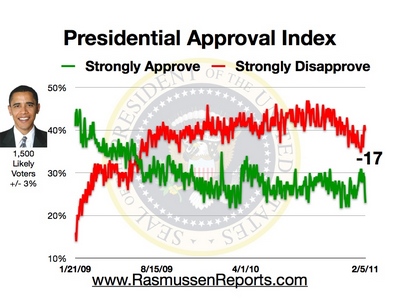 After his post-inaugural honeymoon wore off, his Strongly Approve numbers seem to have settled in to the 25 to 30 percent range, with occasional deviations of no more than 5 percent.  His Strongly Disapprove numbers have more wiggle room, but seem to hover around the 40 percent point, seldom dipping below 38 or spiking above 45.  We’re well within those zones even now.

And his overall approval numbers are similarly well within the normal band: 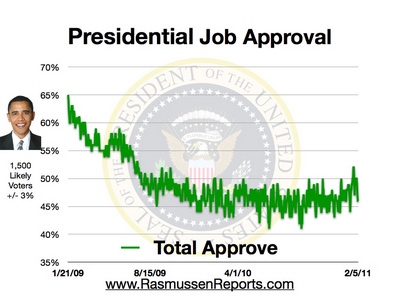 Given the horrid state of the economy, the fact that 45 to 50 percent of the public consistently approves of Obama’s performance is simply remarkable.