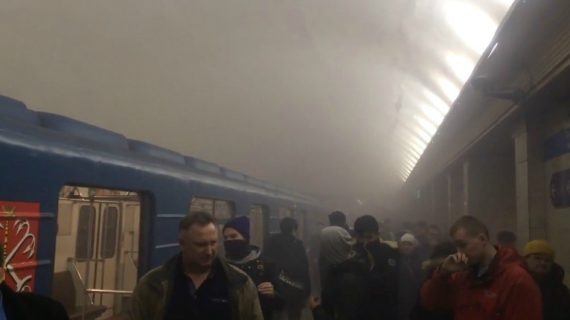 MOSCOW — Explosions at two subway stations in St. Petersburg killed at least 10 people on Monday afternoon, as President Vladimir V. Putin was in the city, Russia’s second largest, for a meeting and a speech, officials said.

Andrei Kibitov, a spokesman for the St. Petersburg governor, told the Rossiya-24 news channel that the explosions had killed about 10 people and wounded at least 50 others.

The subway system was shut after the attacks, which occurred around 2:45 p.m. at the Sennaya Square and Technology Institute stations, in the city center. Both stations are important transit hubs and are normally crowded with passengers, though the explosions occurred before the start of the evening rush.

Mr. Putin, in a televised statement less than an hour after the explosions, said he had spoken with the heads of the special services, including the F.S.B., as well as with law enforcement officials, who he said “will do everything to find out the causes of what had happened.”

Speaking from the Constantine Palace in the Strelna district of St. Petersburg, about 12 miles west of the blasts, he added: “The government, both on the city and federal levels, will do everything to support families of the victims and injured.”

Mr. Putin was in St. Petersburg for a meeting with the president of Belarus, Alexander G. Lukashenko, a traditional ally who has recently feuded with the Kremlin, and to give a speech at the All-Russia People’s Front, a political group started by the president.

This isn’t the first time that there’s been an attack on public transportation systems in Russia. In 2010, subway stations in Moscow were hit by bombings that resulted in the deaths of dozens of people. This attack was later linked to terrorists supporting rebels in Chechnya, the Muslim region in southern Russia that has been the subject of intermittent fighting many times over the past twenty years since the collapse of the Soviet Union. Chechnya is also the region of Russia from which the Tsarnaev brothers, who perpetrated the 2013 bombing of the Boston Marathon, originated from and there were reports that elder brother Tamerlan visited the region and met with terror groups during his visit to Russia in the years before the nomination. Moscow’s subway had also been hit twice before in February 2004 and September 2004 in bombings that resulted in the deaths of more than 40 people between the two incidents. Additionally, Russia has seen many other serious attacks of terrorism such as the bombing of apartment buildings in Moscow that resulted in nearly 300 deaths and more than 1,000 injuries, a 2004 hostage crisis at a theater in Moscow and resulted in more than 170 dead and more than 700 injuries, and, perhaps most infamously, a siege and shooting at a school in Beslan in the North Caucasus region that resulted in hundreds of deaths and more than 750 injuries. These attacks were also carried out by attacker sympathetic to the cause of Chechen independence.

While it hasn’t been officially called a terrorist act yet, it seems clear that what happened in St. Petersburg today was an act of terror, it certainly seems to fall within the pattern that has been established in Russia in the past. As for potential suspects, one must again look to the Chechens as the most likely source of the attack since they’ve done things like this before and they would seem to be the ones most likely to have a beef with Russian government policy. At the same time it is worth noting that there have been reports in recent years of ISIS moving into areas of southern Russia and forming alliances among the Chechen and other rebel groups that have sprung up among Russia’s Muslim population. It’s possible that they played a role in this, or that this is meant as revenge for Russia’s role in aiding Syria in the civil war that includes fighting against ISIS and its allies in that nation. Additionally, the fact that this happened while Putin was in town suggests a level of planning and a deliberate slap at Russia’s President that could be expected from ISIS given their actions in the past.