Face Of Obamacare Comes Out Of The Shadows 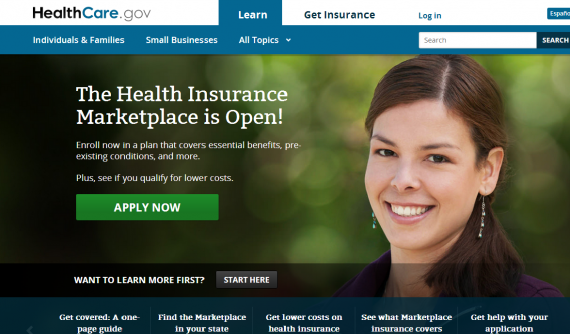 The woman whose face graced the opening page of the Federal Obamacare Exchange website has come forward:

The smiling woman who was once the face of the Affordable Care Act’s website has come out of the shadows to stand up to the “cyberbullying” she says she suffered after the law’s flawed kickoff.

Speaking exclusively to ABC News, Adriana, who asked that only her first name be used, said she was speaking out now to defend herself after weeks of enduring online lampooning.

“They have nothing else to do but hide behind the computer. They’re cyberbullying,” Adriana told ABC News’ Amy Robach.

“I’m here to stand up for myself and defend myself and let people know the truth,” she said.

On Oct. 1, 2013, when the ACA’s website launched to enroll Americans in health insurance through federally run exchanges, it was Adriana’s face that greeted them.

The saga of the photo started innocuously enough. Seeking free family photographs, Adriana emailed a contact at the Center for Medicare and Medicaid Services, the agency responsible for the Affordable Care Act’s rollout, about having photos of her and her family taken in exchange for allowing the photos to be used to market the new health care law. She was never paid.

She learned over the summer that her photo would be on healthcare.gov’s main page, but she didn’t realize it would become so closely associated with the problems of the glitchy website.

“I mean, I don’t know why people should hate me because it’s just a photo. I didn’t design the website. I didn’t make it fail, so I don’t think they should have any reasons to hate me,” Adriana told ABC News.

Speculation swirled that Adriana might not be a legal resident of the United States, and therefore not even eligible for the health care exchanges. Adriana said she is a wife and mother who lives in Maryland with her 21-month-old son and husband of six and a half years. Her husband is a U.S. citizen, as is his her son. Adriana, who is Colombian, said she has lived legally in the U.S. for more than six years, is currently a permanent resident and is applying for citizenship.

Though she is eligible for healthcare through the ACA, Adriana says she hasn’t signed up for it, and is neither in favor nor against it.

To be honest, the fact that she became the face of political satire because of the fact that she was on the front page of the Federal Exchange’s website hardly strikes me as “Cyberbullying.” Indeed, given that she voluntarily lent her image to the endeavor would seem to me to make any such claim entirely without merit, especially since she’s still relatively anonymous and can remain such as long as she chooses not to reveal the full details of her identity.