Here's our debate over shutting down the government over Obamacare in a nutshell. 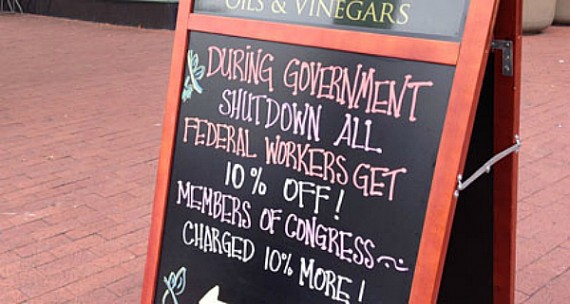 Here’s our debate over shutting down the government over Obamacare in a nutshell. Last evening, John Hawkins of Right Wing News tweeted:

Here's the compromise the GOP should accept on Obamacare: Killing the exemption for members of Congress & their aides. Get that & I'm happy

@johnhawkinsrwn yep–should have led with that. Would have been populist and (then) maybe even attainable.

@mattklewis It's still populist and attainable. It's also a compromise that would probably be acceptable to most of the GOP base.

@johnhawkinsrwn GOP mishandled the opening so badly, the narrative is set. Window of opportunity for this passed. Why would Dems do it now?

But, I responded, it makes no sense:

@DrJJoyner @johnhawkinsrwn True. Semantics. But it's more a taxpayer funded premium support than an exemption.

Seeing this as reasonable, I reply:

@mattklewis @johnhawkinsrwn it's not semantics. Congress as an employer provides health coverage for its employees.

Lewis is again reasonable, so I continue engaging:

@DrJJoyner @johnhawkinsrwn which taxpayers fund. (In any event, not worth arguing over what is prolly a moot point, any way 🙂

@mattklewis @johnhawkinsrwn but surely shutting down the govt so that it's employees wouldn't be covered is idiotic.

@DrJJoyner @johnhawkinsrwn If shutdown is a given, it polls much better than shutting down gov't in a failed attempt to defund ObamaCare.

At which point, I go off to bed.  Hawkins retorts:

@mattklewis @DrJJoyner James, you can argue Democrat talking points all day long, but Congress is getting a special deal & it's wrong.

Up again this morning, I rejoin the conversation:

@DrJJoyner @mattklewis You sure you don't want to add any Daily Kos or Slate links to book-end Nancy Pelosi's talking points?

Confused as to how FactCheck.org, USA Today, and Yahoo Finance are equivalent to Daily Kos, I persist:

@johnhawkinsrwn @mattklewis What the law says is public record, not a matter of opinion. Congress goes from FEHBP to the exchanges.

@johnhawkinsrwn @mattklewis But the exchanges are designed for uninsured. So, Congress trying to make employees whole.

@johnhawkinsrwn @mattklewis Otherwise, a law designed to provide insurance would perversely take it away from Congressional employees.

Hawkins wins the day with this:

Sensing that  facts are useless in this argument, I disengaged.

There are many arguments to be made against Obamacare. Having opposed the legislation throughout the process, I’ve made many of them.  But the “Congress is exempting itself” argument is plain silly.

The facts of the matter, for those interested in such things, are these. Congress, like most large employers, provides subsidized health care for its full time employees. In this case, it’s the same coverage that I get: enrollment in the  Federal Employees Health Benefits Program, which provides a menu of coverage options, with the employer (in this case, the taxpayer) picking up 75ish percent of the tab and the employee the rest.  Since it already provides coverage for its employees, then, Congress wouldn’t be impacted by Obamacare at all.

Except that it is. The law actually requires that Congressional staff come off FEHBP come the beginning of next year and join the exchanges created by Obamacare. Until and unless there’s a flight to push people off employer funded care and into the exchanges—which I think likely—Congress is essentially alone here. Basically, the exchanges would be for people who are unemployed or otherwise not covered by employer health plans and those employed by Congress.

But, as I note in short form in the Twitter exchange above, it would be perverse, indeed, for a law designed, however imperfectly, to widen the number of Americans covered by health insurance to disadvantage a class of people already covered; namely, Congressional employees.  They, alone among all federal workers, would have to pay one hundred percent of their insurance premium. So, Congress is trying to fix the law to make its own employees whole–covering the same 75 percent of the premium that they’re covering now under FEHBP.

I suppose one could construct an argument for why Congressional staffers don’t deserve to have the same subsidized health coverage that all other federal employees and, indeed, most American employees, get. But I don’t see how one could construe the facts of the matter as one in which these people are getting “exempted” from a law that provides a venue for the uninsured to join a group plan, given that they are already covered by a group plan.