Thanks to a Federal District Court Judge, most of Sherlock Holmes is now in the public domain. 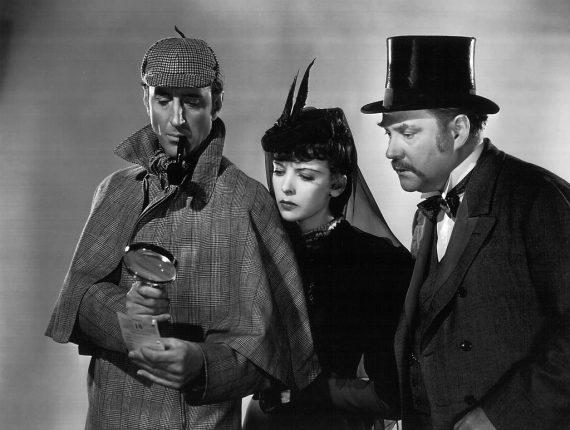 A U.S. District Court Judge in Illinois ruled earlier this week that most of the content and characters from the Sherlock Holmes stories created by Sir Arthur Conan Doyle are now in the public domain under U.S. Copyright Law, meaning that independent filmmakers and script writers are free to use and adapt the material as they wish without seeking permission or making payment to the Estate of Sir Arthur Conan Doyle:

In the more than 125 years since he first appeared, Sherlock Holmes has popped up everywhere from fan fiction set in outer space to screen adaptations like CBS’s “Elementary,” set in contemporary Manhattan. But now, following a legal ruling, the deerstalker-wearing detective is headed to another destination: the public domain.

A federal judge has issued a declarative judgment stating that Holmes, Watson, 221B Baker Street, the dastardly Professor Moriarty and other elements included in the 50 Holmes works that Arthur Conan Doyle published before Jan. 1, 1923, are no longer covered by United States copyright law, and can therefore be freely used by others without paying any licensing fee to the writer’s estate.

The ruling came in response to a civil complaint filed in February by Leslie S. Klinger, the editor of the three-volume, nearly 3,000-page “New Annotated Sherlock Holmes” and a number of other Holmes-related books. The complaint stemmed from “In the Company of Sherlock Holmes,” a collection of new Holmes stories written by different authors and edited by Mr. Klinger and Laurie R. King, herself the author of a mystery series featuring Mary Russell, Holmes’s wife.

Mr. Klinger and Ms. King had paid a $5,000 licensing fee for a previous Holmes-inspired collection. But in the complaint, Mr. Klinger said that the publisher of “In the Company of Sherlock Holmes,” Pegasus Books, had declined to go forward after receiving a letter from the Conan Doyle Estate Ltd., a business entity organized in Britain, suggesting that the estate would prevent the new book from being sold by Amazon, Barnes & Noble and “similar retailers” unless it received another fee.

Chief Judge Rubén Castillo of the United States District Court of the Northern District of Illinois, Eastern Division, stated that elements introduced in Holmes stories published after 1923 — such as the fact that Watson played rugby for Blackheath, or had a second wife — remain under copyright in the United States. (All of the Holmes stories are already in the public domain in Britain.)

But the judge rejected what he called the estate’s “novel legal argument” that the characters remain under copyright because, it claimed, they were not truly completed until Conan Doyle published his last Holmes story in 1927.

“Klinger and the public may use the pre-1923 story elements without seeking a license,” the judge wrote.

As quoted article goes on to note, the ruling comes at a particularly interesting time in that we’re seeing something of a Sherlock Holmes revival in the form of the BBC series Sherlock starring Benedict Cumberbatch, the CBS series Elementary which starts Jonny Lee Miller and casts Lucy Liu as a female version of the Dr. John Waton character, and the movie series staring Robert Downey Jr. and Jude Law in the roles of Holmes and Watson. Unlike its television counterparts, the movies take place closer to the time period in which Doyle’s original stories took place, but all three have proven to be both commercially successful and critically acclaimed. All of this, of course, has taken place under agreements with  the Conan Doyle estate. Now, though, producers and writers will be free to use nearly all of the elements of the Holmes characters and stories without having to compensate the estate at all unless they wish to use elements from the final ten Holmes stories in one way or another, although it’s worth noting that attorneys for the estate are claiming that this ruling will not have an impact on existing licensing agreements, apparently in reference to the BBC, CBS, and movie projects that have proceeding under the blessing, and to the  great financial benefit of Doyle’s estate.

Indeed, it’s unclear what exactly this ruling will mean for future attempts to adapt Doyle’s work. Back in August, an article in The Independent referenced character licensing rights held by an unidentified entity even though the works had been out of copyright in Britain for the past 33 years. In that respect, the ruling by the Illinois Federal District Court refers repeatedly to the pre and post 1923 “Story Elements,” so it’s unclear exactly what that means for purpose of Copyright Law and any claimed licensing arrangements. At the very least, though, it seems that it means that the Plaintiff in this case, along with anyone else, is free to use the elements of any of the 50 or so Holmes stories that were published prior to 1923, including the characters themselves. What would not be permitted, at least not without making an arrangement with the estate, would be to use any of the plot points in the 10 or so stories published after 1923. Distinguishing what does and does not constitute a particular “story element,” of course, may not be easy, but this result clearly would seem to offer other writers the ability to create Holmes-inspired stories without having to deal with the estate at all as long as they stuck to pre-1923 material.

To some extent, this ruling addresses the public domain problem that Matt Bernius wrote about several weeks ago. However, in the end, it’s a limited victory in that it has no real impact on other material, at least not yet, and it doesn’t address the real problem with Copyright Law, which is the fact that Congress has repeatedly extended Copyrights in length to the point that they are essentially perpetual. As I’ve noted in the past, this seems hardly to be in line with what the Constitution actually says on the topic:

The Founders gave Congress the power to “promote the Progress of Science and useful Arts, by securing for limited Times to Authors and Inventors the exclusive Right to their respective Writings and Discoveries.” Both from the text of the Constitution itself and the contemporary debates on the subject, it’s clear that the intention was that by granting inventors and artists a limited period of exclusivity for their works, it would encourage innovation in the sciences and arts. The fact that they intended this to be a limited period is confirmed by the fact that the earliest patent and copyright laws granted protection for what would today consider very short periods of time. The idea that the protections provided by patents and copyrights would last for a century or more likely never occurred to the men gathered in Philadelphia in 1787. More importantly, as copyright and patent laws have become more restrictive it’s become more and more doubtful that our Intellectual Property laws are acting in the public interest.

Inventors and artists deserve some level of protection for their works so that they can be at least granted the hope, if not the guarantee, that they’ll be able to profit from the period when they were working on their creations, sometimes uncompensated for the work they were doing. However, it was never intended that these protections would last for decades after their death. Unfortunately, when it comes to taking the action in Congress necessarily change the law the holders of the copyrights and patents have far more at stake than members of the general public, and they spend a lot of money on Capitol Hill protecting their interests. Because of that, it’s apparent that can real change in the law is going to have to come from the Courts. For that reason alone, this one decision out of Northern Illinois is at least a glimmer of hoped for sanity in this often neglected area of the law.