No previously published works have entered the US Public Domain since 1978. And none are scheduled to enter until 1923. So what are we missing? 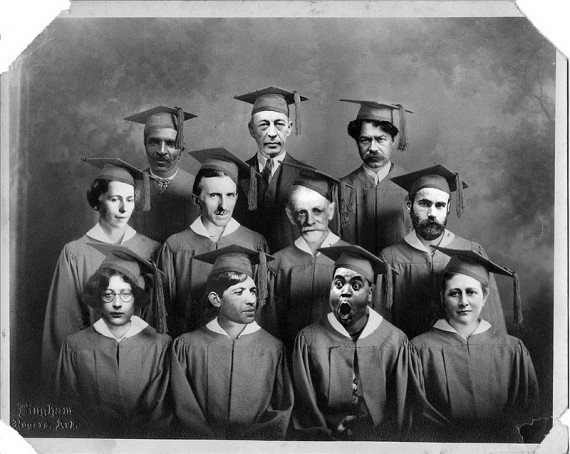 With the turn of each new year, depending on where you live, a number of previously copyrighted works (including literature, music, and film) enter the public domain. They pass from being the property of the authors, or companies that the authors were working for, to being owned by the public writ large. Once public domain, these works can legally be reproduced, remixed and redistributed by any and all people (within the borders of a given country).

Since, internationally, the most common copyright term is “life plus 70 years” (e.g. most European Union members, Brazil, Israel, Nigeria, Russia, Turkey, etc.), the public domain “Class of 2014” is filled with individuals who died in 1943, including such luminaries as George Washington Carver(inventor and author), Sergei Rachmaninoff (composer and musician), Nikola Tesla (scientist), Fats Waller (musician), and Beatrix Potter (author). Countries whose copyright term is “life plus 50 years” (including Canada, many countries in Africa, the Caribbean and Asia) will add the likes of Robert Frost, Sylvia Plath, William Carlos Williams, C. S. Lewis, and Aldous Huxley to their public domain.

So who gets added here in the US? Nobody. Nada. None. In fact, even though the US is “life plus 70 years,” no works will migrate to US public domain until 2019.

This article from the Economist’s Babbage blog explains why:

In 1978 and 1998 [The US] Congress extended, reshaped and expanded copyright durations and the scope of copyright for existing and future works (see Peter Hirtle’s authoritative website for the gory details). For new works produced after January 1st 1978, the period of protection is the same as in the EU. But for works published from 1923 to 1977 for which copyright was properly registered and renewed (as applicable in the period when originally registered or created), copyright was prolonged to a full 75 years from publication regardless of the author’s presence among the living. (Work by employees for a company or for which copyright has been entirely assigned to a firm, so-called “work for hire”, has a different set of rules.)

Until then, not a single, previously published work, will enter the Us public domain.

Why should we care that the US is lagging woefully behind in terms of the expansion of public domain works? Writing at the Huffington Post, Jennifer Jenkins, Director, of the Center for the Study of Public Domain at Duke Law School, makes the following arguments:

It matters for price. As studies have shown, not only are public domain books cheaper, they are available in more editions and in more formats. (Importantly, there is another benefit: when books are in the public domain, anyone can make Braille or audio versions for visually impaired readers. No permission required. And if you think no one would object to such uses, sadly you would be wrong.)

It matters for creativity and free speech. The public domain feeds creativity. Authors build on the cultural artifacts around them. The Waste Land is anything but: it’s a fertile bed of references to dozens of earlier works (from Homer, Virgil, Shakespeare, Kyd, Chaucer, and Milton, to name a few). Michael Chabon — one of my favorite authors — describes how his novel Summerland builds on public domain sources such as American folktales, and stories from Greek, Norse, and American Indian mythology. Some claim that Lolita was borrowed from an earlier story of the same name; pointing in the other direction, Nabokov’s heirs sued the publishers of Lo’s Diary (a retelling of Lolita from the girl’s perspective) for copyright infringement. Examples could (and do) fill volumes. In a brilliant article on the subject, author Jonathan Lethem calls it “the ecstasy of influence.”

[MB: It should be noted that the Walt Disney Company, one of the most fierce advocates for the continued extension of copyright, has made much of its fortune creating feature length animated versions of public domain stories]

It matters for access. Here is the real tragedy. In many cases, despite all of these extensions, no one is benefiting. The expansive copyright term may be great for a few works making money years later. But the vast majority of books exhaust their commercial potential relatively quickly — when the copyright term came in renewable terms of 28 years, copyrights for 93% of books were not renewed. A Congressional Research Service study found that only 2% of works between 55 and 75 years old continue to retain commercial value. For the other 98% of works, there is no benefit at all from continued copyright protection. But the public — at least those members of the public that don’t live in the Library of Congress’ stacks — loses the possibility of meaningful access. In fact, in many cases the copyright holder cannot even be found. For these so-called “orphan works,” the effect of term extension is truly ironic. Copyright, intended to promote access to creativity, ends up, in Justice Breyer’s words, condemning books to “a kind of intellectual purgatory from which [they] will not easily emerge.”

In terms of the “Class of 2014”, current US copyright law means that Beatrix Potter’s Peter Rabbit stories are public domain, because they were published prior to 1923, while many of Rachmaninoff’s recording and compositions will remain under copyright for some time because they were published after 1923. In fact, his later works will not be completely public in the US until 2026 — eleven years after they entered the public domain in the rest of the life+70 countries.

And that is provided the law stays the same. It’s entirely possible that as 2019 approaches, Congress could once again vote to further expand the copyright period. And, without a doubt, there are a number of media companies, including the aforementioned Walt Disney, that support such action.

What remains to be seen is if we as a nation, will come to our senses on this issue and get back in step with the rest of the world. Especially since we are rapidly approaching a point where the international disparities of what is *and* isn’t available in a given public domain are going to become increasingly apparent, especially given the nature of electronic media.

For more on this topic, including things that, under previous US Law, would have been in the commons today, I suggest visiting Duke’s Center for the Study of Public Domain.

Note: While works are not migrating into Public Domain in the US, the Public Domain is still growing. Today’s creators can choose to release their work using so-called Copyleft systems, which provide varying degrees of public rights. The best known of these is Creative Commons.