The subtitle of this post should be: “Online Casino Strikes Again.”

For $10,000, Kari Smith has gone ahead and had her forehead tattooed with the Web address of a gambling site. 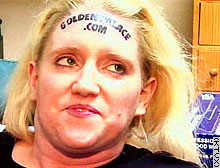 Smith, 30, who sold her unusual advertising space on eBay, said the money will give her 11-year-old son a private education, which she believes he needs after falling behind in school.

“For the all the sacrifices everyone makes, this is a very small one,” she said. “It’s a small sacrifice to build a better future for my son,” she said.

Tattoo artist Don Brouse said he and his staff spent nearly seven hours Wednesday trying to talk Smith out of putting “GOLDENPALACE.COM” above her face. When he did go through with it, he kept the inch-tall letters close to her hairline, where bangs or a hat could provide some cover.

In 2001, Golden Palace famously bought ad space on Bernard “The Executioner” Hopkins’s back during his classic showdown against Puerto Rican pugillist Felix Trinidad. 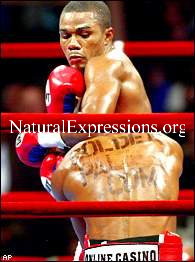 (Thanks for Joe Gandelman for the pointer.)