Gates: Most Revolutionary SECDEF Since McNamara

Robert Gates has been a reluctant Secretary of Defense but his impact at the Pentagon has been tremendous. 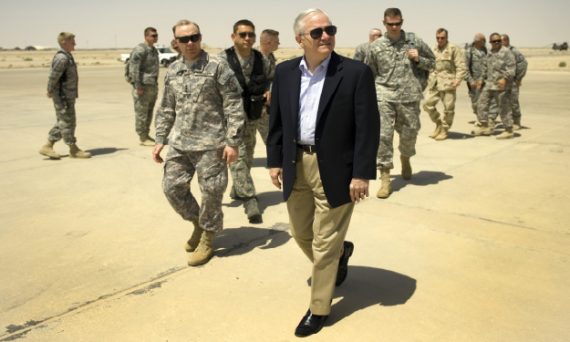 Robert Gates has been a reluctant Secretary of Defense, being coaxed out of the cushy presidency of Texas A&M by President Bush and talked into staying by President Obama.  But his impact on the Pentagon has been tremendous.

In my New Atlanticist column, “Gates’ Remarkable Pentagon Transformation,” I analyze his tenure using excerpts from a superb Foreign Policy profile by Slate national security columnist Fred Kaplan.   In a nutshell, Gates has managed to cut dozens of major acquisition programs and radically change a leadership culture that tended to reward ticket punching and political acumen over combat leadership.  And he’s done it by getting buy-in from the Joint Chiefs, firing generals who carry on as if there isn’t a war on, and putting his own stamp on flag officer selection boards.

The hardest thing for civilian leaders to do is change the military’s organizational culture.  Presidents and SECDEFs try and fail on a regular basis.  Indeed, Dwight Eisenhower, who brought a bit of credibility in defense circles, got nowhere in eight years as president.

Bureaucracies have their way of doing things and seldom change them without extraordinary sustained pressure from outside.  Paradoxically, while the Defense Department exists to fight wars, its leaders tend to see any given war as a temporary aberration in the system that will soon correct itself.   Generals are loathe to defer development and production of major systems, which after all remain in the inventory for decades, in order to ramp up production of something that will only be needed for a few years.  And, of course, few thought Iraq and Afghanistan would go on as long as they have.

Similarly, combat leadership is viewed as a quaint anomaly.  So, while an H.R. McMaster might be an innovative and dynamic brigade commander under fire, he can be twice passed over for promotion to general officer in favor of a peer who spent those years at the Pentagon learning about the “real” work of the military.

While SECDEF is a leading actor in  decisions on procurement, he’s by no means the only one.   Congress, which appropriates the funds, almost always blocks moves to cut major weapons programs because they are almost always parceled out into enough states and districts to make dozens of Representatives and Senators stakeholders.   And the contracting industry is among Washington’s most effective lobbyists.   That Gates was able to achieve this demonstrates no only his superb bureaucratic skills but the esteem in which he is held on both sides of the aisle.

Even with this history, Kaplan and I are skeptical of Gates’ plans to substantially reduce the number of major commands and thus three- and four-star billets.  Considering that we have more of those now than we did during World War II, with a massively larger force, there are few serious analysts who think getting rid of some isn’t prudent.    But it’s unlikely to pass, either, since the cost savings would be minimal in the context of a multi-hundred billion dollar defense budget and, as Gates’ proposed shuttering of JFCOM demonstrates, generate substantial opposition from Congress.