Markos Zuniga spots a rather disturbing ad on the American Spectator website:

This is how the Swifties and USA Next are attacking the AARP:

Yup, they hate our troops and love gays. This is how they plan on attacking the AARP in their efforts to dismantle social security.

Self-parody at its finest.

Funny thing is, you click on the ad, and it just goes to the USA Next homepage. No effort to even argue the case that the AARP is anti-troop and pro-gay marriage.

Well, it got Kos (and I suspect lots of others) to click on the ad, so mission accomplished, I guess.

The ad does indeed take the clicker to the USA Next site. USA Next proclaims itself “an alternative to the liberal AARP.” Virtually all of the click-through page is about the AARP. Kos is right, though: Nothing about gays or the troops.

Charlie Jarvis Appears on The O’Reilly Factor Charlie Jarvis, USA Next’s Chairman & CEO, recently appeared on Fox News’ The Factor with Bill O’Reilly to discuss why so many Americans are turning to USA Next as an alternative to the liberal AARP.

New York Times Front Page: USA Next ‘Swift Boats’ AARP Taking its cues from the success of last year’s Swift boat veterans’ campaign in the presidential race, a conservative lobbying organization has hired some of the same consultants to orchestrate attacks on one of President Bush’s toughest opponents in the battle to overhaul Social Security.

Who Really Works for America’s Families? Art Linkletter discusses which organizations are really working for seniors and their families — and which one is just claiming too.

Is AARP Lying to Seniors? AARP is spending millions of dollars to “educate” the public about President Bush’s proposal to reform and strengthen Social Security. But is AARP telling seniors the truth about Social Security and the reform proposals?

I clicked and read each of the above links, though, and find nothing on the gay marriage or military affairs issue. Ditto at the Online Resources or Issues & Updates pages.

I clicked the Contact link and sent the following query:

I clicked through from your advertisement at the American Spectator on the “Real AARP Agenda” which had an X through an American soldier and a green check mark on two men kissing at what appears to be a wedding ceremony.

I was shocked to learn that the AARP was a pro-gays, anti-troops organization. However, upon clicking over to your site, I see no information to support this image. I’ve read through your TOP NEWS STORY and the Latest News stories on the front page but see nothing. There’s also nothing at the Issues & Updates link.

Could you please direct me to the material on your site about these issues?

I received the following on-screen response:

Due to an overwhelming number of inquiries in support of our “Stop Scaring Seniors” campaign, it can take up to 48 hours to respond to some requests.

We will reply to your inquiry as quickly as possible.

I’ll update this story based on their response, if any.

The article New York Times Front Page: USA Next ‘Swift Boats’ AARP gives us the background on the group:

The lobbying group, USA Next, which has poured millions of dollars into Republican policy battles, now says it plans to spend as much as $10 million on commercials and other tactics assailing AARP, the powerhouse lobby opposing the private investment accounts at the center of Mr. Bush’s plan.
[…]
To help set USA Next’s strategy, the group has hired Chris LaCivita, an enthusiastic former marine who advised Swift Vets and P.O.W.’s for Truth, formerly known as Swift Boat Veterans for Truth, on its media campaign and helped write its potent commercials. He earned more than $30,000 for his work, campaign finance filings show.
[…]
USA Next has been portraying AARP as a liberal organization out of step with Republican values, and is now trying to discredit its stance on Social Security. USA Next’s campaign has involved appearances by its leaders, including Art Linkletter, its national chairman, on Fox News and various television programs. Its commercials are to be broadcast around the country in coming weeks.
[…]
Formerly known as the United Seniors Association, USA Next was founded in 1991 by Richard Viguerie, a Republican pioneer and mastermind of direct mailings, who raised millions of dollars from older Americans using solicitations that sent alarming messages about Social Security. In 1992, there were allegations that the group was used as a device to enrich other companies owned by Mr. Viguerie, drawing criticism from watchdog groups and Democratic lawmakers.

That AARP is a relatively “liberal” group is a given, I think, and a conservative counterpart is a good thing. One hopes, though, that inflammatory advertising will be backed up by facts.

Update: During the time it took to research and write the above, the ad on the Spectator changed:

It still clicks through to the USA Next page.

Update (1129): Jon Henke does some research on this, too, checking out the AARP site and other parts of the USA Next site and comes up with nothing to support the ad. He concludes,

Decent people — and a decent Republican Party — should shun [Charlie] Jarvis, and the USANext organization. Sadly, after spending the past year griping about the misleading implications of professional spinconteurs like Michael Moore, I fear they will stuff integrity and embrace the snake.

Agreed. At best, they’re making inflammatory charges without bothering to back them up. At worst, this is tantamount to libel.

Kevin Drum, Matt Yglesias, and Josh Marshall (who also finds some less sleazy alternate versions of the ad) weigh in as well.

It’s worth noting, though, that even the NYT makes it clear that this group is acting independently of the GOP and the White House. Still, it doesn’t look good for a group using this kind of tactics to be seen as a spokesman for conservative causes, let alone for Social Security reform. 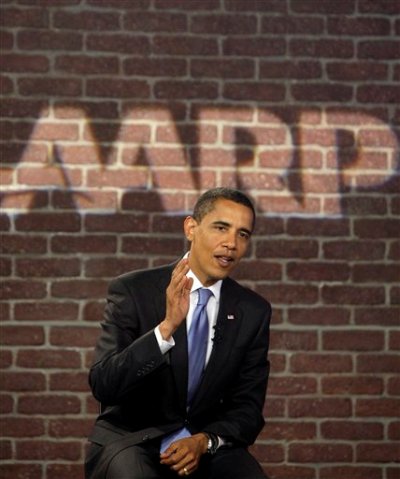