George H.W. Bush has been released from a Houston hospital:

Former president George H.W. Bush was released from the hospital Monday, after spending 12 days at Houston Methodist Hospital due to pneumonia.

The former president, 92, was in the ICU for five days after suffering a respiratory problem caused by pneumonia. Former first lady Barbara Bush, 91, was also admitted to the hospital earlier this month, mostly as precaution. She was discharged Jan. 23.

Bush spokesman Jim McGrath said in a message on Twitter that Bush is thankful for the prayers and kind messages he received during his hospitalization, as well as the “world-class care” from the hospital staff.

He spent two months in the hospital in 2012 with bronchitis and was also hospitalized in 2014 for shortness of breath.

Given the former President’s advanced age, any ailment such as this is obviously a serious concern. It’s good to see he’s recovered enough to be at home with this family, and here’s hoping for a continued recovery. 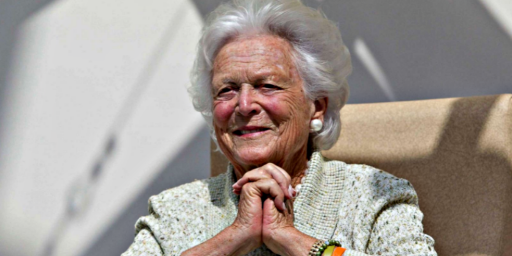