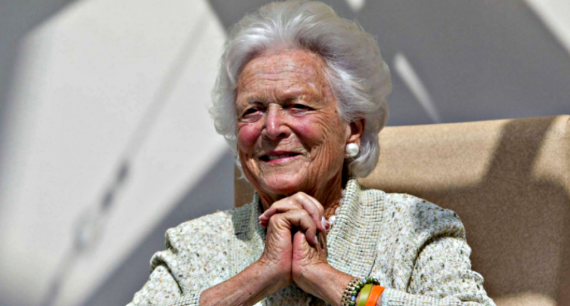 It’s being reported that former First Lady Barbara Bush is in failing health, and the prognosis does not look promising:

“Following a recent series of hospitalizations, and after consulting her family and doctors, Mrs. Bush, now age 92, has decided not to seek additional medical treatment and will instead focus on comfort care,” spokesman Jim McGrath said in a news release.

McGrath did not elaborate as to the nature of Bush’s health problems. She has been treated for decades for Graves’ disease, which is a thyroid condition.

“It will not surprise those who know her that Barbara Bush has been a rock in the face of her failing health, worrying not for herself — thanks to her abiding faith — but for others,” McGrath said. “She is surrounded by a family she adores, and appreciates the many kind messages and especially the prayers she is receiving.”

Bush is one of only two first ladies who was also the mother of a president. The other was Abigail Adams, wife of John Adams and mother of John Quincy Adams.

She married George H.W. Bush in 1945. They had six children and have been married longer than any presidential couple in American history.

Eight years after she and her husband left the White House, Mrs. Bush stood with her husband as their son George W. was sworn in as president.

Her husband, 94, also has had health issues in recent years.

In April 2017, he was released from a hospital in Houston after being treated for two weeks for a mild case of pneumonia and chronic bronchitis. Months earlier, he was a Houston’s Methodist Hospital for 16 days, also for pneumonia.

The nation’s 41s president also was hospitalized in 2015 in Maine, where he and his wife spend summers at their home in Kennebunkport, after falling at home and breaking a bone in his neck. He was hospitalized in Houston in December 2014 for about a week for shortness of breath and spent Christmas 2012 in intensive care for a bronchitis-related cough and other issues.

Bush, who served as president from 1989 to 1993, has a form of Parkinson’s disease and uses a motorized scooter or a wheelchair for mobility. He also served as a congressman, CIA director and Ronald Reagan’s vice president.

CNN reports that Mrs. Bush has in recent years been diagnosed with Chronic Obstructive Pulmonary Disease, more commonly known as COPD, and congestive heart failure, although it’s not clear if these conditions are the reasons she has been in failing health for apparently the best several months. In any case, the reports that Bush has decided to return home and forego treatment seem to indicate that she likely does not have long to live and that she prefers to spend whatever remaining time she has at home with her husband and the rest of the Bush family, which is reported to be in the Houston area at this point. In that case, since a positive outcome is apparently out of the question one can only hope that Mrs. Bush is as comfortable as possible and that she is able to spend as much time as possible with her family and friends as possible.