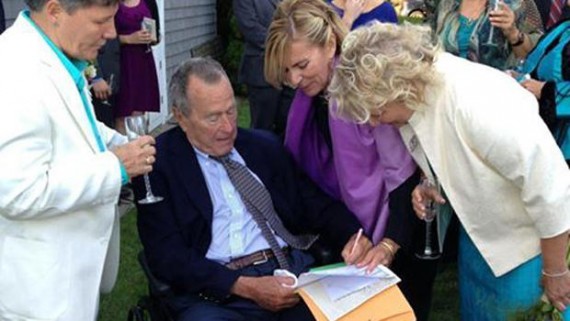 Over the weekend, former President George H.W. Bush served as a witness at a same-sex marriage ceremony in Maine:

In the photo, Bush is seated in a wheelchair, a stack of papers on his lap and his left hand poised with a pen. One bright red sock and one bright blue one peek out below the cuffs of his blue slacks.

The 41st president has deep ties to the area and owns a compound in Kennebunkport, a small coastal town. Thorgalsen and Clement own a general store in neighboring Kennebunk. They were honeymooning overseas and didn’t immediately respond to an email seeking comment Wednesday.