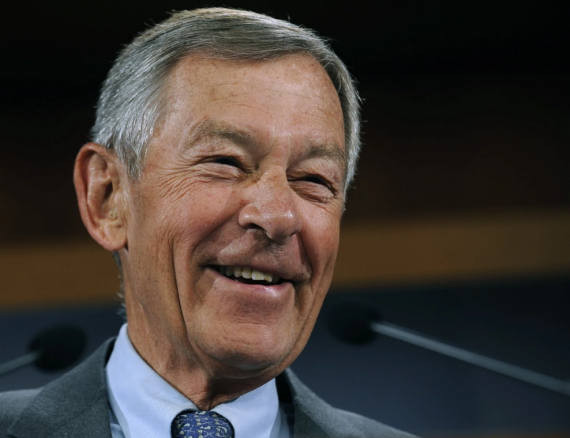 George Voinovich, who had a long political career as both a Senator and Governor in Ohio, has died at the age of 79:

George Voinovich, a former U.S. senator and two-term Ohio governor who preached frugality in his personal and public life and occasionally bucked the Republican establishment, died June 12 at his home in Cleveland. He was 79.

His wife, Janet Voinovich, confirmed the death. The cause was not immediately known.

His death came as a surprise to friends. The Republican had delivered remarks Friday at a 25th Slovenian Independence Day event at Cleveland City Hall. He was set to be a delegate to the Republican National Convention in Cleveland next month.

In June 2003, doctors implanted a cardiac pacemaker because Mr. Voinovich’s heart rate had slowed down over several years due to a condition called progressive sinus bradycardia, and he had experienced various health challenges in recent years.

Twice elected to the Senate, Mr. Voinovich announced in early 2009 that he would not run in 2010. During his 12 years in the Senate, he occasionally found himself at odds with Republican conservatives. He was an early supporter of a proposed federal bailout for the auto industry, which employs thousands of people in Ohio, and he was the rare Republican during the George W. Bush administration to suggest raising taxes to pay for the war in Iraq and hurricane relief

As he left office, Mr. Voinovich counted among his accomplishments the passage of a global anti-Semitism bill, an effort to expand NATO and a bill to protect intellectual property. He also touted what he called a “nuclear renaissance,” pushing to make it easier for nuclear power plants to get new licenses and financing, and to improve the oversight of the Nuclear Regulatory Commission.

He was succeeded by fellow Republican and former congressman Rob Portman.

Mr. Voinovich cultivated an image as a debt hawk and opposed President Obama’s $787 billion economic stimulus package, saying it was weighed down by too much spending that wasn’t stimulative.

He also prided himself on his own frugality. He shined his own shoes, bought his clothes on sale and as governor banned bags of peanuts and other snacks on state airplanes to save public money. He also sold one of the state’s airplanes in 1993 to a South American tourist company for $350,000.

In 2003, Mr. Voinovich stood firm against the size of Bush’s $726 billion tax-cut proposal, saying a country with a multitrillion-dollar debt couldn’t afford it.

In his December 2010 farewell speech in the Senate, he asked his colleagues to come to grips with a fiscal situation “on life support,” saying that he didn’t agree with legislation to prevent an income tax increase. But he complimented Obama and legislative leaders for working out a compromise.

(…)
But his political path also included heartbreak. In 1979, while he was running for Cleveland mayor, his 9-year-old daughter, Molly, was killed when she was hit by a van that went through a red light. Molly, the youngest of four children, was returning to school after lunch.

“When one loses a child, things come into focus — what is important, what is unimportant,” Mr. Voinovich said. “You see more. You feel more. You experience more. We all take so much for granted.”

George Victor Voinovich was born July 15, 1936, in Cleveland. His parents were immigrants of Serbian and Slovenian descent.

Mr. Voinovich served in the Ohio legislature from 1967 to 1971, winning support from Cuyahoga County’s heavily Democratic voters because of his connection to the ethnic communities and his easygoing style.

By the late 1970s, Cleveland was in default and most people blamed the Democratic mayor, Dennis Kucinich, who constantly fought electric utilities, the city’s banking community and other big-business interests.

Mr. Voinovich defeated Kucinich, who later became a congressman, and went on to serve a decade as mayor, winning credit from Republicans and Democrats for turning the city around.

In 1990, Mr. Voinovich was elected to the first of two four-year terms as governor.

Vulnerable to his emotions, Mr. Voinovich once broke into tears when protesters gathered outside the governor’s office to demand that he restore cuts the legislature made to welfare.

For his time, Voinovich was considered relatively conservative but, as happened with many of his contemporaries from states such as Ohio, as time went on he found himself being considered more and more a part of the moderate “establishment” as the Republican Party moved further to the right. Had he run for re-election in 2010, he likely would have won just based on his name alone but at that point he definitely would have been something of an anachronism in a Senate GOP Caucus that was becoming dominated by the Tea Party.