The Gingrich campaign’s reaction to its own incredible failure to get on the Virginia ballot gets more bizarre, as this message in its Facebook page demonstrates:

By now you’ve likely heard that our effort to gain access to the primary ballot in Virginia was not successful. This was not due to a lack of effort by our volunteers, but the cumbersome process in Virginia.

We are exploring alternate methods to compete in Virginia – stay tuned.

Going forward, we will be as in-front of the process as possible and with the help of our grassroots volunteers we will make all other deadlines.

Newt and I have talked three or four times today and he stated that this is not catastrophic – we will continue to learn and grow. Remember that it was only a few months ago that pundits and the press declared us dead after the paid consultants left. They declared that the decision not to compete in the Ames Straw Poll would mean that Iowans would ignore us. Some will again state that this is fatal.

Newt and I agreed that the analogy is December 1941: We have experienced an unexpected set-back, but we will re-group and re-focus with increased determination, commitment and positive action. Throughout the next months there will be ups and downs; there will be successes and failures; there will be easy victories and difficult days – but in the end we will stand victorious.

To help achieve that outcome we each need to spend the next 24 hours enjoying our families and friends as much as possible. Enjoy their company. Be grateful for them. Gather strength from them. The promise of a better future for our family and friends is the reason we are committed to rebuilding the America we love.

May the spirit of the season fill each of you. Merry Christmas.

There really are no words.

On the off chance they decide to delete this idiotic message, here’s a screenshot: 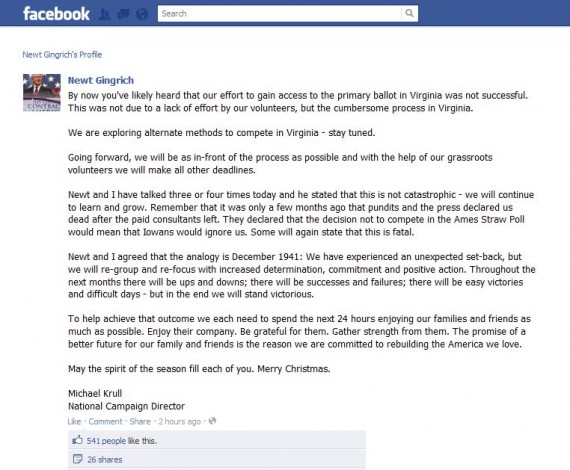