GLORY? Love this headline from Reuters: US Pilots ‘Bask in Glory’ of Bombing Baghdad. Oddly, it portrays American pilots in a bad light, contrasting their lust for killing with the poor Iraqi civilians being killed. 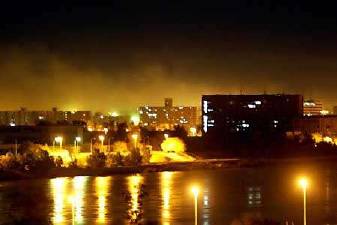 Smoke and fire light the night sky of Baghdad after an air strike March 28, 2003. The United States staged bombing raids over Baghdad early on March 29 after dozens of Iraqis were feared killed in a busy street market in one of the most ferocious bombardments of the war.
Photo by Goran Tomasevic/Reuters
FILED UNDER: Iraq War, Baghdad, Reuters