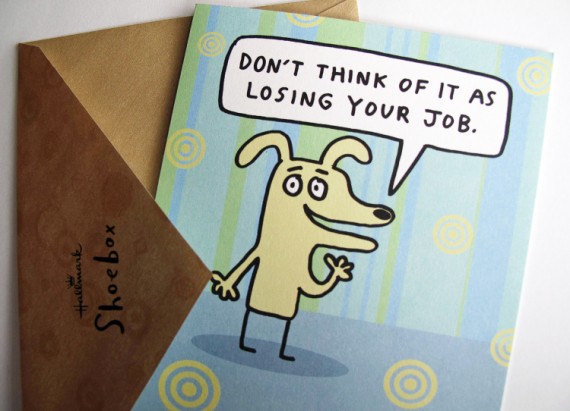 File this one under there’s a market for everything:

Greeting card companies have taken a cue from the nation’s 9 percent unemployment rate.

In a six-by-four inch envelope, someone can send a friend who lost his or her job a pre-printed message of encouragement and sympathy.

Though not available at every corner store, layoff greeting cards are being manufactured by Hallmark and sold at its stores and online — and selling well, said Frank Fernandez, owner of two Hallmark stores in North Texas.

“We’re in the emotional business,” said Fernandez. “You want to say something emotionally correct and give them (your friends) a card that you’ve chosen to express your own thoughts.”

One Hallmark card with a photo of a cat reads: “Is there anywhere I could hack up a hairball, like say, on a former employer’s head?” Another card says: “Losing a job is just plain painful. So I want you to remember I’m in your cheering section … “

Greeting cards. Because, you know, picking up the phone and actually talking to your recently unemployed friend is just too darn inconvenient.