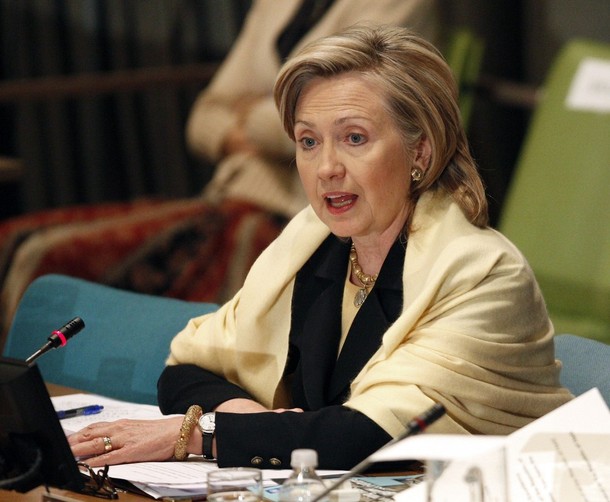 Hillary Clinton sounds for all the world like a woman who intends to leave the public stage come January 2013:

Secretary of State Hillary Clinton told CNN’s Wolf Blitzer she does not want to serve a second term as secretary of state or run for president of the United States.

Blitzer sat down with the former 2008 presidential candidate in Cairo.

Q- If the president is reelected, do you want to serve a second term as secretary of state?

Q- Would you like to serve as secretary of defense?

Q- Would you like to be vice president of the United States?

Q- Would you like to be president of the United States?

Because I have the best job I could ever have. This is a moment in history where it is almost hard to catch your breath. There are both the tragedies and disasters that we have seen from Haiti to Japan and there are the extraordinary opportunities and challenges that we see right here in Egypt and in the rest of the region. So I want to be part of helping to represent the United States at this critical moment in time, to do everything I can in support of the president and our government and the people of our country to stand for our values and our ideals, to stand up for our security, which has to remain first and foremost in my mind and to advance America’s interests. And there isn’t anything that I can imagine doing after this that would be as demanding, as challenging or rewarding.

Q- President of the United States?

You know, I had a wonderful experience running and I am very proud of the support I had and very grateful for the opportunity, but I’m going to be, you know, moving on.

Of course, this doesn’t meant that Clinton wouldn’t stay on if President Obama asked her to, much like Robert Gates has stayed on for two years after the President who first nominated him for Secretary of Defense left office, but that does strike me as a rather emphatic answer. Also, there will be those who will simply refuse to believe that she, and her. husband, will simply leave electoral p0litics and I’m sure we’ll see a nice healthy dose of “Hillary in 2016” speculation four years from now. However, as I’ve noted before, Clinton will be 69 years old in 2016 and she may not be in the mood for what would be another open race for the Democratic nomination.