Hillary, Hugo, and that Diplomacy Thing

Diplomacy means having to be nice. 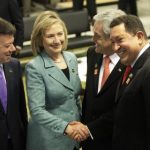 Breitbart.com has an AFP story (Chavez, Clinton chat at Brazil inauguration) which includes a photo of Secretary of State Hillary Clinton shaking hands with Venezuelan President Hugo Chávez whilst being flanked by Colombian President Juan Manuel Santos on the left and Chilean President Sebastián Piñera on the right.  All were in attendance for the inauguration of Brazil’s new president, Dilma Rousseff:

Despite a simmering diplomatic row, President Hugo Chavez and US Secretaryof State Hillary Clinton were seen having a brief, friendly chat Saturday at the inauguration of Brazil’s President Dilma Rousseff.

“They talked and smiled, at least for five minutes. It looked like a social conversation, both were smiling,” a Brazilian official who witnessed the encounter told AFP on condition of anonymity.

The encounter came only three days after the United States revoked the visa of Venezuela’s ambassador in Washington, in reprisal for Chavez’s rejection of the US president’s appointed ambassador to Caracas.

But Chavez and Clinton were all smiles as they mingled with the presidents of Chile and Colombia and the prime minister of Portugal while waiting to meet Rousseff.

The fact that the Secretary of State of the United States of America exchanged pleasantries with a foreign head of state, even one with whom the US has various issues, at the inauguration event strikes me as hardly newsworthy (let alone an object of criticism, if not derision, as a handful of bloggers have done).

Fundamentally, the nature of the event requires a certain amount of decorum from the attendees.  It would have been an insult to Brazil for the US representative to turn the event into a chance to score petty political points.  Further, it is unclear what would be gained by snubbing Chávez at the event (and allowing for a very different news story to hit the wires).  Indeed, from a calculating point of view, what is more likely to give Chávez political ammunition:  a few minutes chatting, or a snub?  I am going with a snub, as he could more easily use that for one of hit rants about the Empire.  Although, really, Chávez is going to say whatever he wants in any event, so trying to control it strikes me as a fool’s errand anyway.  (And, ultimately, I am not sure that it matters all that much).

I also see this kinds of events as like any work environment:  we all encounter people, within our own organizations and perhaps in rival ones, that we might would like to take down a peg or two when we encounter them in public, but ultimately know that such behavior would be counter-productive.  International diplomacy often is very much like that.