Hillary Clinton may take a hit to her personal finances in excess of $11 million, Bret Schulte reports for U.S. News.

With rounds to fight running out, the self-described Rocky Balboa of politics will soon be forced to assess the damage sustained by the most expensive primary bout in history. Sen. Hillary Clinton doled out $6.4 million of her own money to her campaign since April, her campaign told reporters this week. That brings her total cash outlay to more than $11 million since January. And she’s not ruling out spending more as she plans to compete in the six remaining contests. If she plans to knock out heavyweight fundraising champ, Sen. Barack Obama, she may have no other choice.

Thanks to a little-known provision in 2002’s McCain-Feingold campaign-finance reform bill, a campaign must repay the loan to a candidate before Election Day. In this case, that’s the nominating convention. After the election has passed, a bankrupt campaign is limited to gathering just $250,000 from contributors, which means that modest sum is all it can give back to a candidate. In short, Clinton stands to lose $11,150,000. “If she wants to be repaid, she’d have to move on that between now and the national convention,” says former Federal Election Commission chairman Michael Toner. “Otherwise, it just becomes another contribution.” The campaign, meanwhile, has other debts to consider as well. According to her latest FEC filing, the Hillary Clinton for President campaign committee owes millions to vendors, including more than $4.5 million to Penn, Schoen & Berland Associates, the consulting firm of her former chief strategist Mark Penn.

That adds another wrinkle to her decision to stay in the race. Time is running out to pay off friends, allies, and vendors. Plus, by all accounts, Clinton’s most ardent supporters are tapped out, either unwilling or unable by law to donate any more. If she’s going to continue competing, she has to ask herself how many more millions she’s willing to spend in a quest many describe as increasingly quixotic. In short, how much does she care about the money? Politics guru Larry Sabato at the University of Virginia figures not much; after all, the Clintons earned $109 million since leaving the White House. “It’s like Michael Bloomberg spending a billion. Would he miss it? Is she going to miss $10 million? There’s only so much you can spend yourself anyway.”

Quite right. And, really, it’s hard to feel too awfully sorry for the Clintons here. After all, the reason they’re rich to begin with is that they’ve cashed in quite nicely on Bill’s presidency. A few million was a small risk, indeed, for a chance to double down.

Further, the $11 million or so Hillary stands to lose if she can’t recoup her campaign debt in time could pale in comparison to the lost future earnings that they will incur if they have permanently hurt themselves with their fan base through a scorched earth, race-baiting campaign. 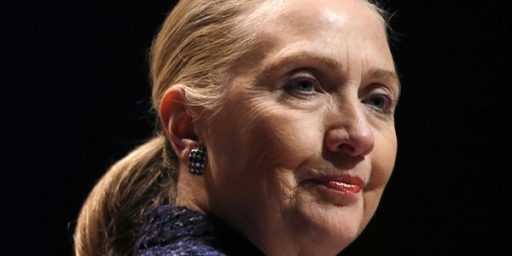 Has Hillary Clinton Learned from 2008 Mistakes?