Thomas Holbrook takes a look at the history of pre and post-debate polling and determines that Presidential debates have had little actual impact on the horse race. As Holbrook notes, if debates do have a real impact on the state of the race then we should be able to look at pre and post-debate polling and see an impact of some kind. To start, Holbrook posts this chart of Presidential races going back to 1988: 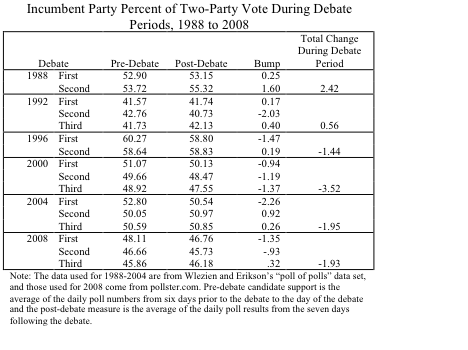 These data suggest that the norm is for very little swing in candidate support following debates. Across all 16 presidential debates the average absolute change in candidate support was just less than 1 percentage point. There are a few notable exceptions, of course. Two that stand out are the second debate in 1992, following which George H.W. Bush lost 2 points, and first debate of 2004, after which George W. bush lost 2.26 points. Other debates with above average (but still small) vote shifts are the first debate in 1996, the second debates in 1988 and 2000, and the first debate of 2008. Each of these debates has its own story, and I’m sure we can all think of anecdotes to explain the bumps and wiggles.   Although the analysis is terribly outdated by now, my debate model from Do Campaigns Matter? came to the profound conclusion that the candidate viewed as having won the debate generally gets a small bump. I told you it was profound.

Focusing on single debate bumps may be obscuring a more general, cumulative effect of debates. The last column in the table shows the change in candidate support from one week prior to the first debate to one week after the final debate. Here we see that the debate period generated a 2.42 point bump for George H. W. Bush in 1988; cost Al Gore 3.52 points in 2000; cost George W. Bush almost 2 points in 2000; and John McCain lost almost two points in 2008. Of these debate period swings, the 2000 debates stand out as the most important, especially in the context of the closeness of the election. Part of the explanation for Gore’s swoon during the debate period is perhaps related to his performance but another important factor was the media meme that emerged as a result of the debates, including open discussions of whether or not Al Gore was a “serial exaggerator” (see Jamieson and Waldman).  This brings up an important point: it is probably not a good idea to attribute all of the change in candidate support during the debate period to the debates, since there are many other important events, or perhaps even natural drifts in candidate support occurring during these several week periods.

Turning attention to 2012, Holbrook suggests that we’re likely to see very little impact on the race from the debates themselves. However, whatever media meme is created by these debates, about either candidate, could very well have a major impact on the next month of the campaign. We’ll have one last round of polling to look at by tomorrow afternoon to give us our final pre-debate snapshot of the race. It will be interesting to see what, if any, impact, these encounters actually have.