The two-year-old Homeland Security Department is undergoing a massive overhaul to centralize its analyses of terrorism intelligence and place higher priority on bioterrorism. Homeland Security Secretary Michael Chertoff was resetting top priorities in a bid to spur a sluggish bureaucracy beset by turf wars and growing pains. Creation of an intelligence director to centralize terrorism analyses and a chief medical officer to focus on bioterrorism are among top changes to be announced by Chertoff on Wednesday. These are two areas where experts believe the department has lagged.

Chertoff ordered a review in March, shortly after he took office, to ensure Homeland Security puts most of its resources into the nation’s most vulnerable areas. “Our department must drive improvement with a sense of urgency,” Chertoff said in remarks prepared for Wednesday and provided to The Associated Press. “Our enemy constantly changes and adapts, so we as a department must be nimble and decisive.”

Transportation and border security are among Chertoff’s top priorities and will get more personnel, detection and screening technology and other resources, according to department officials. They spoke Tuesday on condition of anonymity because the changes had not yet been announced.

While all quite logical, the fact that these changes weren’t part of the original design is astounding. Although I thought the creation of the Department, not to mention it Orwellian name, was unlikely to actually make us safer, one would think they would have at least done what they were supposed to do; namely, centralize counterterrorism resources and enhance border security. It is as if the Defense Department suddenly decided that it should procure weapons and begin training in case of war.

Furthermore, we have just created a new National Intelligence Director. It is not entirely clear why we need another one within DHS.

Homeland Security Secretary Michael Chertoff will announce a major restructuring of his 180,000-employee department today, changing how the two-year-old agency handles intelligence, sets policy and manages key law enforcement operations in response to criticism that domestic security remains unfocused and poorly coordinated. Chertoff will realign agencies that secure the nation’s skies and police its borders, replace or reassign the duties of three of five undersecretaries, and emphasize missions such as increasing national preparedness and screening people and cargo before they enter the nation, congressional and department officials said.

Many Americans will notice no immediate impact from the changes. But analysts said the restructuring could help the department better accomplish fundamental tasks such as protecting computer and financial networks, guiding local preparedness efforts, processing threat information, and identifying key private-sector vulnerabilities.

Chertoff’s plan marks a milestone in the difficult evolution of the largest civilian Cabinet department, launched in March 2003 by the Bush administration under pressure from Congress. The government undertook the largest federal reorganization since 1947 to give one department the task of defending the homeland from attack, but critics say the agency has failed to set priorities and is mired in turf disputes.

“This is the last, best chance to get it right,” said James Jay Carafano, senior research fellow for defense and homeland security at the Heritage Foundation, who, like others, has faulted the administration’s initial effort for failing to give the secretary clear control of 22 component agencies or create a strong planning component. “If the Department of Homeland Security is something the government is really going to do 24-7, 365 days a year, for years, doesn’t it make sense to get it done right, now?”

[…] Many of the expected changes have long been rumored Ã¢€” and desired Ã¢€” by officials on and off Capitol Hill, such as a new office dedicated to developing policy, a departmentwide intelligence operation, and a greater centralization of operations, sources say. Chertoff is also rumored to be planning a few surprises, such as returning the Federal Air Marshal Service to the Transportation Security Administration (TSA), from which it was removed in November 2003.

Overall, three directorates Ã¢€” Information Analysis and Infrastructure Protection (IAIP), Border and Transportation Security (BTS), and Emergency Preparedness & Response (EP&R) Ã¢€” will be most radically altered by the plan, according to the sources, who declined to be named because ChertoffÃ¢€™s plan was not public knowledge.

The intelligence, or Ã¢€œIA,Ã¢€ side of IAIP will become an intelligence operation reporting directly to the front office, the sources said. Several knowledgeable individuals within and outside the department described ChertoffÃ¢€™s plan to CQ Homeland Security. DHS has not released details of the plan.

A new directorate of preparedness will be created that will comprise the Ã¢€œIPÃ¢€ side of IAIP and the Office for Domestic Preparedness, from the Office of State and Local Coordination, as well as portions of EP&R. IAIP will no longer exist.

The Federal Emergency Management Agency, which was folded into EP&R when DHS was created, will be removed from that directorate and largely restored to its former state, according to the sources, some of whom were briefed by Chertoff. It will report directly to Chertoff and Jackson.

The position of BTS undersecretary, once held by former Rep. Asa Hutchinson, R-Ark. (1997-2001), will be eliminated, according to the sources; the directorate itself will cease to exist. Its various subagencies, including TSA, U.S. Customs and Immigration Enforcement (ICE) and the Bureau of Customs and Border Protection (CBP), will report directly to the front office.

Several sources also said that the Federal Air Marshal Service, which was moved under ICE when it left TSA, will be transferred back.

Michelle Malkin remains skeptical that we are going to get serious about border security:

If the Border Patrol is forbidden from doing interior immigration enforcement and local cops and state troopers can’t or won’t do it, and ICE remains understaffed and unable/unwilling to do the job, who will pick up the slack?

Before he can persuade the public that this is just more pointless Titanic deck chair rearranging, Chertoff has an uphill battle convincing his own employees.

Mark Krikorian agrees, adding, “the real problem with immigration is bad policy, not how the boxes are arranged on the bureaucratic organizational charts. ” Indeed, that’s almost always the case.

Update (1402): While we may not be doing enough to secure our borders, Dan Drezner notes that we are likely doing (or at least spending) too much on homeland defense when weighed against the actual threat. 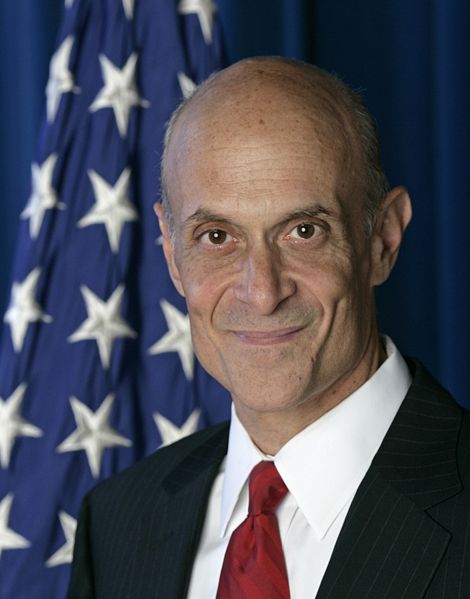