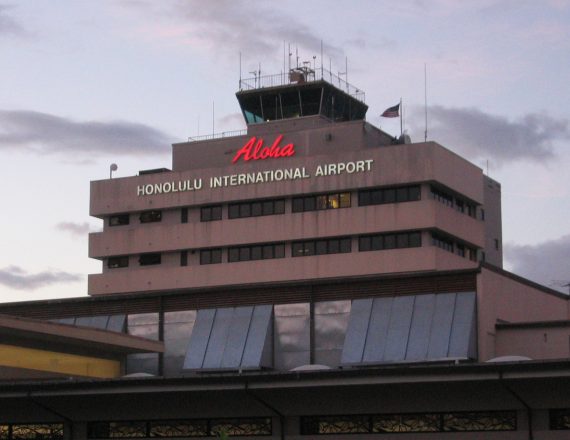 The Guardian reports on a new study that lists Honolulu International as one of three airports most likely to be the jumping off point for a worldwide pandemic:

When the next outbreak of Sars or Swine flu hits, New York’s John F Kennedy airport and Los Angeles’s airports will likely be the key spreaders of disease, according to a new study. But while the influence of these super-hubs may not come as much of a surprise, the third most outbreak-friendly airport in the states is far smaller, and far less obvious – Honolulu International.

In a paper published Monday in the journal PLoS One, a team of researchers from MIT outlined a new computer model that predicts how the 40 largest American airports may contribute to the diffusion of contagious disease within the first few days of a potential epidemic.

They looked at which hubs may be key “early spreaders” because knowing where epidemics may begin is key to stemming an outbreak, Marta Gonzalez, professor in the department of civil and environmental engineering at MIT, and one of the contributors to the new model, told the Guardian.

JFK and LAX seem like obvious candidates since they are both high-traffic airports that receive a large volume of international flights, but what about Honlulu? Well, it turns out that volume of travelers isn’t the most important factor:

While Honolulu is neither the busiest airport in the US (that would be Atlanta International), nor even among the top 20 biggest hubs (such as Chicago O’Hare and Minneapolis St Paul, both of which featured in the film Contagion), volume is not the key factor in disease spreading. Atlanta’s airport, which sees the highest volume of travelers in the US was ranked just eighth in its ability to cause contagion.

Honolulu airport “combines three important features that catalyze contagion spreading”, the study reports. Its geographical positioning in the middle of the Pacific Ocean makes it a prime layover between the US west coast and large Asian hubs; it’s also “well connected” to other powerful spreader airports, such as LAX; and it sees a high volume of long-range travel; all of which would help to spread a disease outbreak.

The remaining airports on the list make sense. After Honolulu, it’s San Francisco, Newark, Chicago (O’Hare), and Washington (Dulles).  Interestingly, though it is the busiest airport in the country, Atlanta’s Hartfield-Jackson Airport doesn’t make the list. At the very least, a study like this would seem to suggest which airports officials should be concentrating on in preparing screening methods for future pandemics or, in the event of a known or feared pandemic, which airports we may need to limit or at least monitor travel into and out of.

Those interested can read the study here. Additionally, here’s an interesting video on the role airports play in spreading disease: