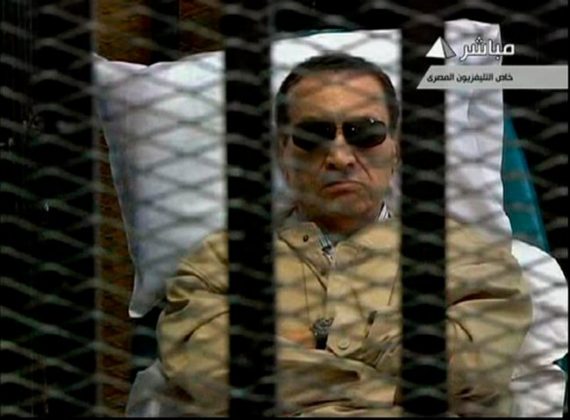 Less than 16 months after he was deposed amid widespread civilian protests, former Egyptian President Hosni Mubarak has been sentenced to life in prison for crimes related to the military crackdown during those protests. However there seems to be a serious question about whether the verdict can withstand appeal:

CAIRO — An Egyptian judge on Saturday sentenced former President Hosni Mubarak to life in prison for the killing of unarmed demonstrators during the first six days of protests that ended his rule.

It was the second verdict against an Arab ruler brought before the law by a popular revolt, after the conviction in absentia last year of Tunisia’s Zine el-Abidine Ben Ali, and for many Egyptians it may be the greatest achievement so far of the uprising that began 16 months ago. With the nation still awaiting the ratification of a new constitution, the election of a new president and the hand-over of power by its military rulers, the decision is Egypt’s most significant step yet toward establishing the principle that no leader is above the law.

Yet lawyers critical of Mr. Mubarak immediately warned that the verdict may not survive an appeal. The judge acquitted several lower-ranking security officials of responsibility for the same deaths, raising questions about the chain of command. He also dismissed corruption charges against Mr. Mubarak and his sons on technical grounds, and by early afternoon protesters angry at the flimsiness of the decision were pouring into Tahrir Square, the symbolic heart of the revolt.

Egyptian state television reported that within hours of the decision, Mr. Mubarak, 84, had suffered a “health crisis” as he was being flown by helicopter to a Cairo prison from the military hospital where he had awaited the verdict. He was being treated inside the helicopter which he refused to leave, the state network reported.

After a flowery tribute to the glory of the Egyptian uprising, the judge, Ahmed Rafaat, pronounced that “defendant Mohamed Hosni Mubarak be sentenced to a life term for the allegations ascribed to him, being an accessory to murder” in the killing of more than 240 demonstrators in the last six days of January 2011. But the judge also acknowledged that the prosecutors had presented no evidence that either Mr. Mubarak or his top aides had directly ordered the killing of protesters.

Instead, the judge held Mr. Mubarak responsible for failing to stop the killing — an unusually low standard of proof for a murder conviction under either Egyptian or international law. The judge sentenced Mr. Mubarak’s former interior minister Habib el-Adly to the same penalty for the same reasons.

But the dismissal of murder charges against a group of Mr. Adly’s aides and other security officials raised questions about which officials, if any, might be held more directly responsible. As for the corruption charges, the judge ruled that a 10-year statute of limitations had expired since Mr. Mubarak and his sons, Alaa and Gamal, allegedly received a set of luxurious Red Sea vacation homes as a kickback from a Mubarak crony, Hussein Salem.

Mr. Mubarak showed no reaction to the verdict. Wearing dark glasses and a light-colored tracksuit, Mr. Mubarak lay reclining on a hospital gurney in the metal cage that holds criminal defendants here, and he blinked several times after the judge read the verdict.

It seems odd that Mubarak would be convicted of failing to stop the killings, but that nobody is being held directly responsible for said killings. Indeed, under American law, it would seem like the lack of evidence of a direct order would, in and of itself, be sufficient to acquit Mubarak of legal culpability. Egyptian law is obviously different, but this seems like an incredibly thin reed on which to hang the conviction in any case. Mubarak is no doubt guilty of man things during his 30 years in office, but it strikes me that it does Egypt as a nation no good to ignore the Rule of Law in order to punish him, just for the sake of punishing him. It will be interesting to say the least to see how this turns out in the end.