How Virginia Went From Red To Purple

Virginia went Republican in every presidential contest from 1968 to 2004. It's likely to vote for Barack Obama again five weeks from now. 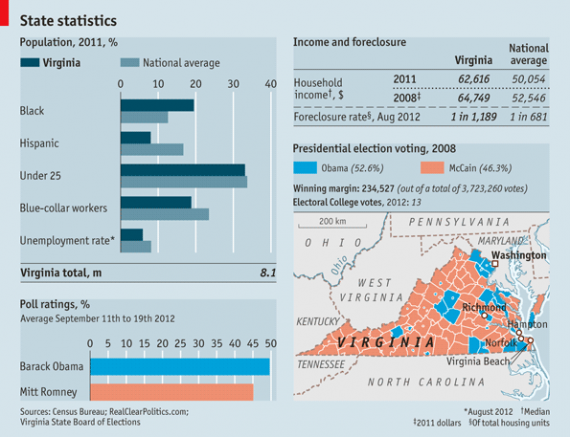 Over the weekend, The Economist explored why Virginia, long among the reddest of the red states, has suddenly become ripe for Democrats. The answer is found in my neck of the woods:

“NORTHERN VIRGINIA,” bellowed Mitt Romney at a packed outdoor rally in the region earlier this month, “could well determine who the next president is.” He was not exaggerating. The outer suburbs of Washington, DC, are the most populous and independent-minded part of the state. They plumped for Barack Obama in 2008, helping to turn Virginia Democratic in a presidential election for the first time since 1964. The state, in turn, proved the tipping point for Mr Obama on election night: as soon as the results from Virginia were in the prognosticators called the election for him. Much the same will apply this time round: it will be hard for Mitt Romney to win the presidency without clinching Virginia.

Virginia’s politics have changed because its demography has. Almost half the population was born outside the state (including more than a tenth born abroad), and so does not necessarily share the Southern sensibilities of the natives. The tobacco-growing, coal-mining former mainstay of the Confederacy lives on only in the state’s southern and western reaches. These areas—bar a few college towns and black-majority counties—are solidly red at the presidential level.

But the most conservative parts of the state are sparsely populated, and have relatively low turnout. The bulk of the population lives in a crescent that stretches from the outskirts of Washington to the coast via Richmond, the state capital. These areas are much more politically volatile. They include a few Democratic-leaning spots—some Washington suburbs, and the cities of Richmond, Norfolk and Hampton—as well as the main swing counties: Loudoun and Prince William near Washington, Henrico outside Richmond and Chesapeake near the coast.

They are home to the Pentagon, in Arlington County, and America’s biggest naval base, in Norfolk, along with their many contractors and service industries. Other federal agencies and workers spill over from Washington. Coastal towns like Virginia Beach attract lots of tourists. According to Mr McDonnell, the state also boasts more tech jobs, relative to its population, than any other bar California. Its biggest export is computer chips.

It would be nearly impossible for Romney to win the White House without Virginia and it’s inconceivable to me that he’ll win Ohio and lose Virginia. Indeed, he’s likely to lose both.

Northern Virginia is an odd creature because so much of its enormous wealth derives from the fact that the seat of government is nearby. But it attracts an enormous amount of highly educated talent from around the country and, indeed, around the world.

Like the county-by-county maps of the United States as a whole that became popular after the 2000 election, looking at a map of Virginia such as the one atop the page here is grossly misleading. Geographically, Virginia—like the country as a whole—is overwhelmingly Republican. But the population is increasingly clustered in a handful of major metropolitan areas and these are almost all turned off by a GOP message that’s aimed at a rural base.