“In lieu of flowers…..make a donation to ANYONE running against Barack Hussein Obama”

In lieu of flowers, at Jim's request, please make a donation to ANYONE running against Barack Hussein Obama 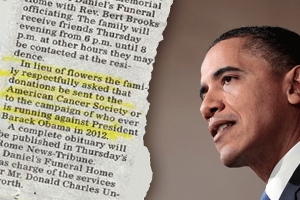 The late James Harrison of The Woodlands, Texas really doesn’t like Barack Obama. So much so in fact that he’s asking mourners to donate to anyone running against the President:

In lieu of flowers, at Jim’s request, please make a donation to ANYONE running against Barack Hussein Obama, or the American Cancer Society

Who said political activism had to end when you died.

UPDATE (James Joyner):  Salon‘s Justin Elliot reports that, “This is at least the sixth such anti-Obama obituary since last August.”

Because old people are disproportionately Republican and old, a high percentage of those currently planning on voting that black man out of office will be dead before they get the chance. But they are not powerless! They can make sure their final decisions on this Earth are motivated by their favorite emotion, hate, and the object of their hate, the president of the United States. Yes, many dead people are now asking in their obituaries that, in lieu of flowers, donations made to candidates who oppose Barack Obama. Our nation’s dead people are ANGRY and are not above making their funerals political. Death is a time for reflecting on WHERE IS THE BIRTH CERTIFICATE?

This gives “last words” a whole new meaning. But it does strike me as a wee bit tacky.