Infighting at the National Security Council

H.R. McMaster is fighting a losing battle for control of the National Security Council staff. 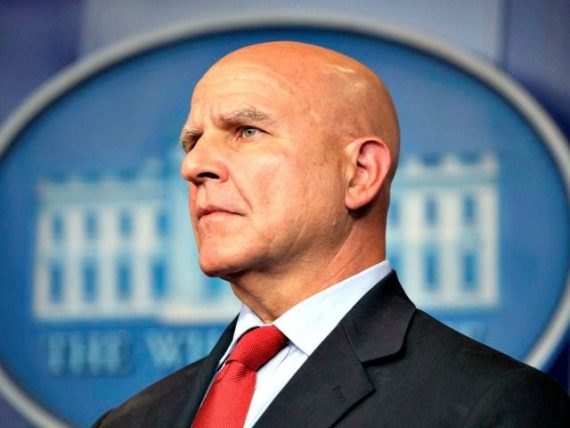 A report at Foreign Policy describes the struggle by National Security Advisor H.R. McMaster to wrestle control of the National Security Council from loyalists of his predecessor, Michael Flynn. It’s apparently an uphill fight.

The memo at the heart of the latest blowup at the National Security Council paints a dark picture of media, academics, the “deep state,” and other enemies allegedly working to subvert U.S. President Donald Trump, according to a copy of the document obtained by Foreign Policy.

The seven-page document, which eventually landed on the president’s desk, precipitated a crisis that led to the departure of several high-level NSC officials tied to former National Security Advisor Michael Flynn. The author of the memo, Rich Higgins, who was in the strategic planning office at the NSC, was among those recently pushed out.

The full memo, dated May 2017, is titled “POTUS & Political Warfare.” It provides a sweeping, if at times conspiratorial, view of what it describes as a multi-pronged attack on the Trump White House.

Trump is being attacked, the memo says, because he represents “an existential threat to cultural Marxist memes that dominate the prevailing cultural narrative.” Those threatened by Trump include “‘deep state’ actors, globalists, bankers, Islamists, and establishment Republicans.”

The memo is part of a broader political struggle inside the White House between current National Security Advisor H.R. McMaster and alt-right operatives with a nationalist worldview who believe the Army general and his crew are subverting the president’s agenda.

Though not called out by name, McMaster was among those described in the document as working against Trump, according to a source with firsthand knowledge of the memo and the events. Higgins, the author, is widely regarded as a Flynn loyalist who dislikes McMaster and his team.

While crazy by normal NSC standards, we’ve seen a lot of reports of this type since the Trump administration began. The memo is available in its entirety at the link. It’s a mix of paranoid conspiracy nonsense and astute analysis of the situation. While the “deep state” label is highly problematic, there’s simply no question that the vast bulk of career national security professionals are skeptical of the new administration’s policy goals. That Trump loyalists would be frustrated by this—and by McMaster’s attempts to circumvent said policy goals in the direction of more normal ones–is hardly shocking.

More problematic is the sheer lack of process and deep mistrust starting at the very top:

The story of the memo’s strange journey to the Oval Office captures the zeitgeist of what has become the tragicomedy of the current White House: a son trying to please his father, an isolated general on a mission to find a leaker, a right-wing blogger with a window into the nation’s security apparatus, and a president whose closest confidante is a TV personality.

The result is an even wider rift between the president and his national security advisor, marking what may be the beginning of the end of the general’s tenure, and a radical shift of power on the NSC.

That part is a long story but the key bit is this:

Trump Jr., at that time in the glare of media scrutiny around his meeting with a Russian lawyer at Trump Tower during the presidential campaign, gave the memo to his father, who gushed over it, according to sources.

In a comedy of errors, Trump later learned from Sean Hannity, the Fox News host and close friend of the president, that the memo’s author had been fired. Trump was “furious,” the senior administration official said. “He is still furious.”

More importantly than the specific controversy is this:

McMaster “doesn’t really have any allies,” said a source familiar with the NSC staff. “It doesn’t seem as though he has the ear of the president, which is obviously essential to his survival.”

There has, since the earliest days of the transition, been hope among national security analysts that the handful of “adults” in top spots in the administration—most notably Generals Jim Mattis and John Kelly—would ultimately outmaneuver the loyalists and amateurs. That wishfulness peaked when McMaster was brought in to replace Flynn. The problem with that theory has always been that this president, even moreso than his two predecessors, values loyalty and personal ties above virtually all else. Mattis and Kelly seem to be having significant influence, at least at the margins. Kelly, recently elevated to White House chief of staff, seems in particular to have the president’s ear. By all indications, McMaster is outside the circle of trust.