No surprises so far. 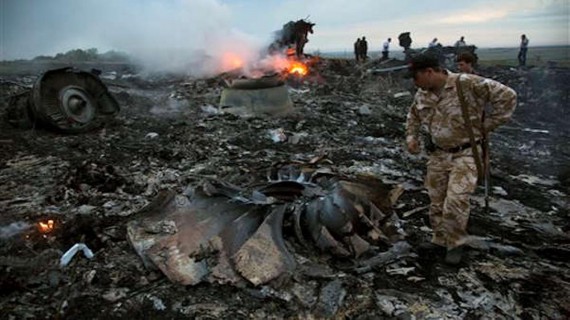 Initial data recovered from the data recorders on board Malaysia Airlines Flight 17 is apparently consistent with the theory that the plane was shot down by a surface-to-air missile:

Unreleased data from a black box retrieved from the wreckage of Malaysia Airlines Flight 17 in Ukraine show findings consistent with the plane’s fuselage being hit multiple times by shrapnel from a missile explosion.

“It did what it was designed to do,” a European air safety official told CBS News, “bring down airplanes.”

The official described the finding as “massive explosive decompression.”

[Investigators] are finding more evidence, though, of the sort of blast holes through the plane that an exploding missile might make. The Dutch say their full team will concentrate on this sort of specific find. Covering the vast crash site systematically would be too difficult, and security arrangements are still uncertain.

Backing up this initial examination of the data recorders are reports that the exterior of the plane shows the signs of shrapnel damage consistent with the explosion of a missile:

Monitors at the crash site of Malaysia Airlines Flight 17 said Thursday they had detected “shrapnel-like” holes on parts of the plane, marking the first official, on-the-ground sighting of evidence suggesting the plane was downed by a missile.

Officials from the Organization for Security and Cooperation in Europe mission deployed in eastern Ukraine spotted a part of the plane’s fuselage dotted with “shrapnel-like, almost machine gun-like holes,” the spokesman for the mission, Michael Bociurkiw, said.

The holes were found in two separate pieces of the fuselage and were examined by the Malaysian aviation security officials who are part of the international mission investigating the crash, Mr. Bociurkiw said.

The damage to the jet’s exterior is a crucial clue to understanding what brought down Flight 17. Still, the presence of shrapnel damage may not immediately point to the SA-11 surface-to-air missile that U.S. officials have said was likely fired by pro-Russia rebels, as some air-to-air missiles also are designed to destroy an aircraft with a shrapnel-producing warhead.

Finding actual shrapnel would yield more certainty over the missile type. Different missiles use different warhead materials, opening the possibility for a chemical analysis that could sort out what kind of weapon was involved.

The SA-11 has a high-explosive fragmentation warhead that sends a “spherical cloud of shrapnel” that detonates nearby and is designed “to sever the rods, hoses and wires” on the aircraft, said John Pike, director at GlobalSecurity.org.

Such a determination still wouldn’t answer the most critical question of who fired the missile. Ukraine, which also owns Buk antiaircraft systems, has said it didn’t fire any of its systems, a claim the U.S. has backed.

Further investigation could be hampered, though, by increased fighting in the region:

KHARKIV, Ukraine — Restarting a stalled effort to recover the last bodies from the crash site of a Malaysian airliner shot down by a surface-to-air missile, around 30 unarmed Dutch police left this eastern Ukrainian city early Sunday for the debris-strewn site after the Malaysian government struck a deal with pro-Russia rebels over access to the area.

After traveling by road to Donetsk, a rebel stronghold 190 miles south of Kharkiv, however, the Dutch team put off trying to reach the crash site because of fighting in the area, a spokeswoman for the Organization for Security and Cooperation in Europe said.

Small groups of foreign police and forensic experts have managed to reach the area where the Malaysian Airlines Boeing 777 crashed on July 17, but efforts to secure the site with larger contingents have repeatedly fallen through.

The prospects for a more robust foreign presence got a boost on Sunday when Malaysian Prime Minister Najib Razak reached an agreement with a leader of the rebels, Alexander Borodai, “to allow a deployment of international police personnel to enter the crash site,” Mr. Najib’s office said in an email.

But heavy fighting threatened to torpedo hopes of a breakthrough and cause yet more delays before the last bodies can be retrieved and evidence collected.

Australia said on Sunday that it was also sending unarmed police officers to the crash site as part of an international push to prevent any further meddling with human remains and evidence scattered over rebel-controlled farmland.

Debris from the crash is scattered over a rural area dotted with wheat and sunflower fields, and the site remains unguarded despite growing reports of tampering with the plane wreckage and passenger items there. Monitors from the O.S.C.E. reported after a visit to the site on Friday that parts of the downed jet’s wreckage had been moved and that pieces of hand luggage had been unzipped and left empty.

“Our objective is to get in, to get cracking and to get out – that’s our objective,” Prime Minister Tony Abbot of Australia told a news conference in Canberra, the capital. Australia had considered allowing some of its men to carry weapons but Mr. Abott indicated he had decided against that.

Mr. Abbot said 49 foreign police and experts, including 11 Australians, would reach the site Sunday and that “considerably more” would follow in coming days. Clashes in the area between rebels and Ukrainian forces, however, risked scuppering this plan.

Heavy fighting broke out around midday on Sunday near the crash site and the nearby town of Torez, where an air raid siren sounded continually and artillery explosions were heard to the north. Residents scrambled to move into basements. Reporters in Torez said rebels seemed in a state of alarm, as they drove cars in the streets at high speeds.

Earlier on Sunday, local separatist commanders told reporters at the site that they could no longer guarantee the safety of the about 14 square miles of debris fields, as the Ukrainian military was advancing toward the area. The road between Donetsk and Torez was closed by the separatists.

The most obvious risk here, of course, is that the scene has been so corrupted at this point due to the fact that it has been both exposed to the elements and under the control of the very group of people accused of shooting it out of the sky that it may be impossible to get any useful information out of the evidence left behind. There have been reports since the incident about material simply being taken away by rebels and, in some cases by people living in villages nearby looking for souveneers. Other reports have indicated that there have been efforts to use credit cards belonging to some of the victims in the days after the attack. And, now, there are unconfirmed reports from reporters who have been on the scene from the early hours of this incident of new “evidence” that has shown up over night, which may or may not be an effort by separatists to plant evidence of a Ukrainian military connection to the incident

On a more basic level, of course, all of this has got to be torture for the family members of the people who died on Flight 17. Officials in The Netherlands have only just begun the long process of identifying the remains that have been brought there over the past several days, for example. Yesterday, they officially confirmed the identity of the first victim, but by some estimates it could take months before the process is complete. Indeed, it is not even clear at this point that all of the bodies have been removed from the crash site, and nothing has apparently been done with the personal belongings of all of these people, all of which apparently still sits out exposed to the elements to the extent it hasn’t been looted by separatists and others. In that respect, the entire thing is really quite appalling.