Kurds in Iraq voted overwhelmingly for independence in a non-binding referendum, and the result is threatening to create a new conflict in the Middle East. 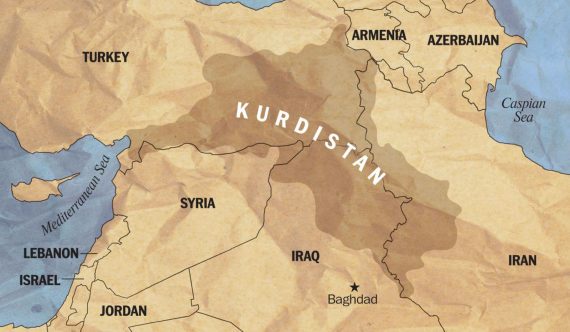 Iraqi Kurds have voted overwhelmingly for independence, a move that seems guaranteed to create a political crisis in that country even as the war against ISIS is going on:

ERBIL, Iraq — Iraq’s Parliament asked the country’s prime minister on Wednesday to deploy troops to a disputed area held by Kurdish forces, its latest retaliation against a referendum in which the autonomous region voted decisively to seek independence.

The referendum on Monday has roiled the region and prompted a confrontation with the government in Baghdad, which has called the vote illegal and has vowed to ignore the results. The vote has also provoked the Kurdish region’s two powerful neighbors, Turkey and Iran.

The request for troops was an indication of how seriously Baghdad objects to the Kurdish bid for independence, although the decision is up to Prime Minister Haider al-Abadi.

Parliament asked him to send troops to the oil-rich city of Kirkuk, one of several disputed areas held by Kurdish troops but claimed by Baghdad.

Iraqi troops, including Shiite Muslim militias incorporated into Iraq’s armed forces, are already in the Kirkuk area, and the American-led coalition is battling Islamic State militants elsewhere in the Kirkuk region. Kurdish troops known as pesh merga are deployed in Kirkuk, a multiethnic city they seized when the Iraqi Army fled an assault by the militants in 2014.

The inclusion of Kirkuk and other disputed areas in the referendum enraged the Iraqi government, which interpreted the move as a land grab. Baghdad has accused the Kurds of illegally selling Iraqi oil from the Kirkuk oil fields through a pipeline that runs into Turkey.

The referendum on Monday was nonbinding outside Iraqi Kurdistan and was not internationally recognized.

Kurdish authorities in Erbil announced on Wednesday that 92.7 percent of those who went to the polls on Monday had voted for Kurdish leaders to seek independence.

About 72 percent of 4.6 million registered voters cast ballots, with about 2.9 million voting “yes” to independence and about 224,000 “no,” the Kurdish Independent High Electoral Referendum Commission reported.

The announcement of the results, broadcast on Kurdish-run television, is likely to further escalate tensions in the region, where the landlocked Kurdish enclave is surrounded by countries opposed to the referendum.

Mr. Abadi, speaking to Parliament on Wednesday, said Iraq would not negotiate with the Kurds unless they annulled the results of the vote.

Saying he had warned the Kurds “of the consequences of the crisis with Kurdistan,” Mr. Abadi added, “The preservation of the security of the citizens of the country is our priority.”

The government would protect all citizens, including Kurds, Mr. Abadi said, but he added, “We will call to account anyone who has participated in the referendum.”

Iran and Turkey also objected to the referendum, fearing unrest by their own Kurdish minorities. The two nations have conducted military exercises on their borders with Iraq near the Kurdish enclave and have threatened sanctions. Iraqi troops have taken part in the Turkish exercises.

On Wednesday, a delegation from the Iraqi military was sent to Iran to “coordinate military efforts,” a military statement said.

The Kurdish’s region’s transportation minister told reporters in Erbil on Wednesday that the Kurdish Regional Government would not cede control of the airports and called the Iraqi ultimatum “political and illegal.” The minister, Mawlud Murad, said the airports were critical to the American-led coalition’s fight against Islamic State militants.

Mr. Murad said the Kurdish government had offered to negotiate the airport ultimatum with Baghdad. The region’s other international airport is in Sulaymaniyah, in northeastern Iraq.

As noted, the referendum was not authorized by the Iraqi government and was non-binding notwithstanding the fact that Kurdish authorities inside Iraq are acting as if it was. As a result, the outcome is creating a backlash across the region, including not just Iraq but also the other nations in which Kurdish minorities exist and have been asserting claims for autonomy and greater independence for quite some time now. The governments in both Turkey and Iran, which both have substantial Kurdish populations of their own that have also argued, and even fought for, independence, have both stated that they are prepared to support the Iraqis in whatever effort they may take to crack down on the Kurds in Iraq in the wake of the referendum. In addition, all three governments have taken steps to make it clear that they will not accept the outcome of the referendum and that there would likely be a military response of some kind of Kurds sought to actually take steps to assert independence in the wake of the referendum’s outcome.

The potential ramifications for this vote are rather obvious. Not only does it threaten to split Iraq at a time when it is still fighting off a threat from ISIS that has already divided the nation, it also threatens to revive other conflicts that had been lying more or less dormant since the region turned its attention to the Syrian civil war and the fight against ISIS. Inside Iraq, of course, the split between Kurdistan and the central government has been a long-standing one that was basically put on hold due to an unsteady alliance against ISIS that appears to be breaking apart. Additionally, Iraq has been maintaining an unsteady balance between its Sunni, Shiite, and Kurdish populations since the downfall of Saddam Hussein. And independence move by the Kurds would threaten that de facto truce and could potentially plunge the nation into conflicts that ISIS could easily exploit for its own benefit. Outside of Iraq, the fact that the Kurds claim territory that stretches from Iran all the way into parts of Syria, Turkey, and even parts of Lebanon threatens stability across the region. The Kurds in Syria, for example, are already effectively operating as if they are independent of the regime in Damascus, and of course, the Kurds in Turkey have been pursuing independence and political autonomy for decades, with some choosing to resort to terrorist attacks in other parts of Turkey. As Daniel Larison has suggested, any move by the Iraqi Kurds to actually create an independent state would likely be taken as encouragement by the Kurds in other parts of the region, and could potentially lead to violent crackdowns by all three governments.