Despite initial reports of success, it’s beginning to look like the “top kill” procedure to stop the Gulf of Mexico oil leak may not be working:

BP engineers struggled Friday to plug a gushing oil well a mile under the sea, but as of late in the day they had made little headway in stemming the flow.

Amid mixed messages about problems and progress, the effort — called a “top kill” — continued for a third day, with engineers describing a painstaking process of trying to plug the hole, using different weights of mud and sizes of debris like golf balls and tires, and then watching and waiting. They cannot use brute force because they risk making the leak worse if they damage the pipes leading down to the well.

Despite an apparent lack of progress, officials said they would continue with the process for another 48 hours, into Sunday, before giving up and considering other options, including another containment dome to try to capture the oil.

The view from an inside source is not optimistic:

BP suspended pumping operations at 2:30 a.m. Friday after two “junk shot” attempts to plug the leak with rubber and other materials, said a technician working on the operation, who spoke on condition of anonymity because he was not authorized to speak publicly about it.

The technician said that engineers had come up with a variety of theories about why efforts have failed so far, and they were trying different sizes of objects. He said the process required trial and error — and sifting through various theories among engineers in the operation’s control room — about the best way to clog the “internal geometry” of the damaged equipment.

The technician said that despite all the injections, at various pressure levels, engineers had been able to keep less than 10 percent of the injection fluids inside the stack of pipes above the well. He said that was barely an improvement on the results Wednesday, when the operation began and was suspended after about 10 hours.

“I won’t say progress was zero, but I don’t know if we can round up enough mud to make it work,” said another technician on the project. “Everyone is disappointed at this time.”

The technician also said that there were disagreements among engineers about why efforts had been unsuccessful so far, but that those disagreements were based on a lack of a clear understanding of what was happening inside the pipes on the sea floor.

Hopefully, the engineers will figure this one out because the general consensus seems to be that the fixes other than “Top Kill” will become more and more difficult. Politically, though, a failure at this point is probably the last thing the Obama Administration needs. Despite their efforts to project an image of being engaged and competent, a consensus seems to be emerging that they’ve dropped the ball on this one, especially in the public relations department. Even James Carville and Chris Matthews are calling the President out for a lack of perceived leadership.

A lot of this criticism is absurd, of course. There isn’t very much that the President can do individually to stop the oil leak, and it’s become apparent that the Federal Government does not have the expertise necessary to solve what is essentially an engineering problem at this point. Nonetheless, thanks to the cult of the Presidency, the perception exists that the President must be appearing to “do something” to solve this problem. If the perception develops among the public that Obama is failing at that task, then this oil spill could become a huge political problem for him.

Update: The New York Times is now reporting another failure to stop the leak:

HOUSTON — BP engineers failed again to plug the gushing oil well on Saturday, a technician working on the project said, representing yet another setback in a series of unsuccessful procedures the company has tried a mile under the sea to stem the flow spreading into the Gulf of Mexico.

BP made a third attempt at what is termed the “junk shot” Friday night, a procedure that involves pumping odds and ends like plastic cubes, knotted rope, and golf balls into the blowout preventer, the five-story safety device atop the well. The maneuver is complementary to the heavily scrutinized effort known as a “top kill,”which began four days ago and involves pumping heavy mud into the well to counteract the push of the escaping oil. If the well is sealed, the company plans to then fill it with cement.

The technician working on the project said Saturday pumping has again been halted and a review of the data so far is under way. “Right now, I would not be optimistic,” the technician, who spoke on condition of anonymity because he is not authorized to speak publicly about the effort. But he added, that if another attempt at the junk shot were to succeed, “that would turn things around.” 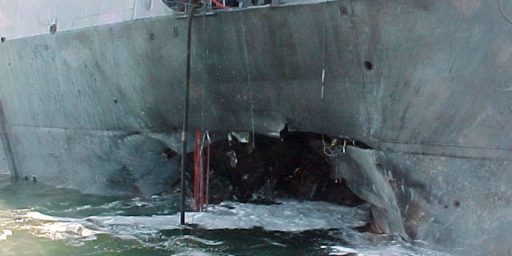