The cover of Patrick Wensink's novel Broken Piano for President bore a striking resemblence to the label of a certain quality Tennessee sour mash whiskey. So, Jack Daniel's' lawyer sent him a nice note. 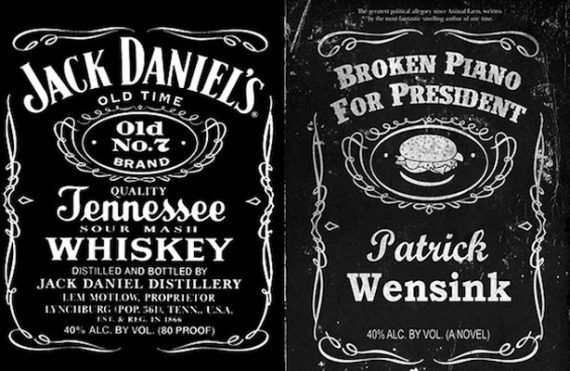 The cover of Patrick Wensink’s novel Broken Piano for President bore a striking resemblence to the label of a certain quality Tennessee sour mash whiskey. So, Jack Daniel’s’ lawyer sent him a nice note.

Broken Piano for President may be an obvious joke, but it did one thing quite seriously: Its old-timey, straight-from-the-saloon cover art is pretty much a direct rip-off of the iconic label for Jack Daniel’s Tennessee whiskey. Jack Daniel’s trademark lawyer, doing her job, realized this bit of infringement — and also realized that the infringement was perpetrated with love, or at least with jest. So she sent Wensink what may well go down as the most polite, encouraging, and empathetic cease-and-desist letter ever to be sent in the history of lawyers and humanity. That lawyer, Christy Susman, even offers to pay for Wensink to change his cover design! Or at least ”to contribute a reasonable amount towards the costs of doing so”!

Would that all matters of IP dispute could be adjudicated with such missives. 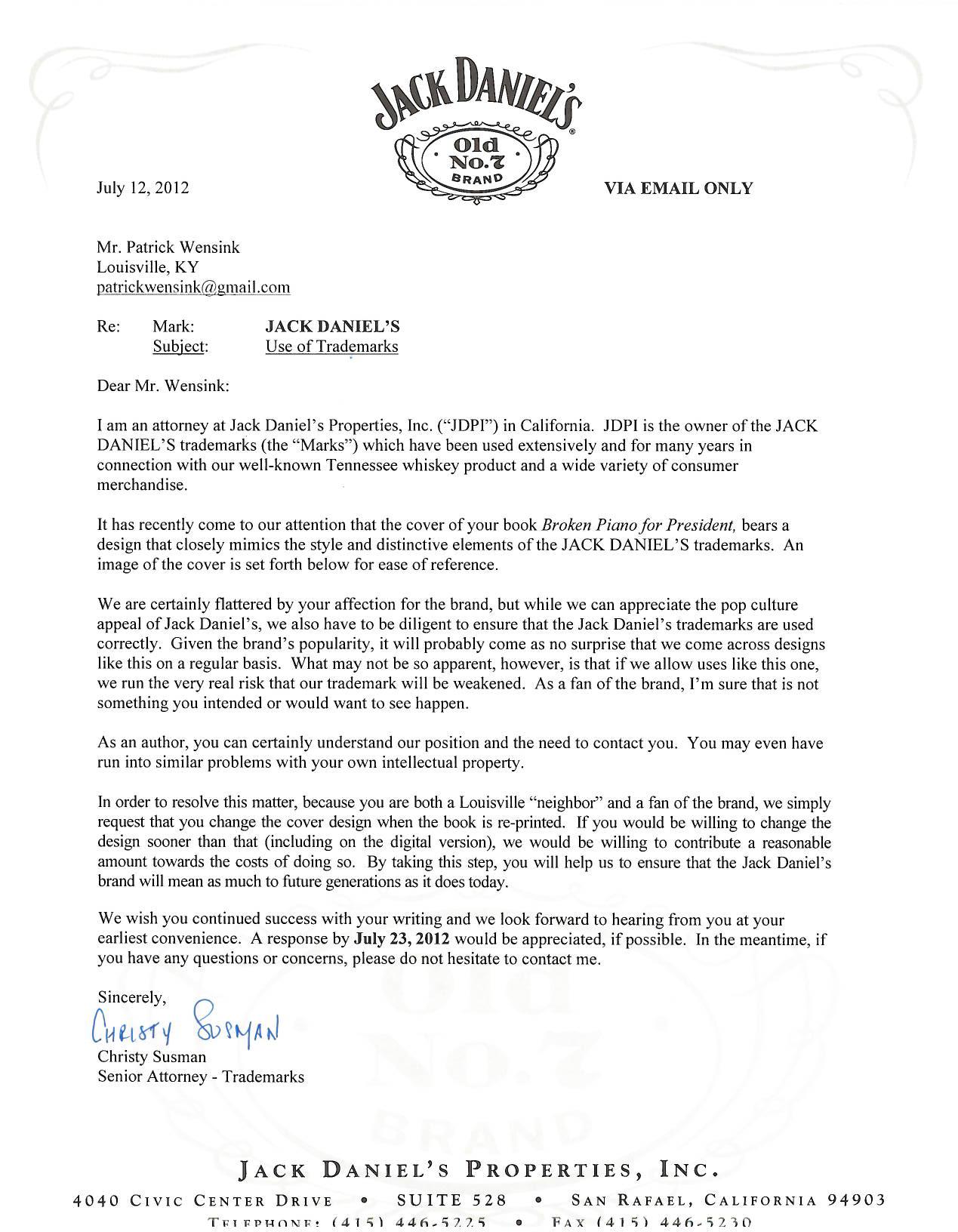 If nothing else, this light-handed treatment is garnering plenty of praise for Jack Daniel’s everywhere from Boing Boing to Mashable and Esquire.  Even the author who received the letter is singing their praises.

What follows is, perhaps, the most polite cease and desist ever written. If it wasn’t signed by some lawyer, I’d imagine ol’ Gentleman Jack penning it himself, twirling his bushy mustache.

Then again, not everyone is cheering. Garber commenter “Buckland” observes,

The entire book screams satire. Protecting your trademarks from satire is usually a tough thing to do.

One interpretation is that JD knows they don’t have a chance of pushing the author off it. And in some states threatening letters against satirical works can get you in all kinds of trouble with anti SLAPP (Strategic Lawsuit Against Public Participation) laws.

Another interpretation is that JD knows they don’t have a chance on this one. But they still want to put up a token defense of the trademark without pissing anybody off.

Maybe. Then again, the book isn’t a satire of Jack Daniel’s whiskey so I’m not sure they have license to ape the trademark.

FILED UNDER: Law and the Courts, Tennessee, The Atlantic, Whiskey