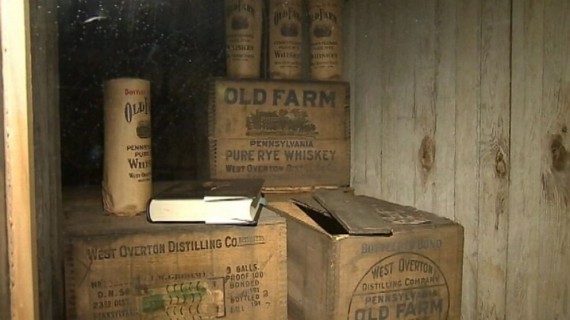 A Pittsburgh man has apparently gone through $102,000 in historic whiskey:

The owner of an historic inn in Pittsburgh has brought charges against a former tenant she says was supposed safeguard 50 bottles of vintage whiskey valued at more than $100,000 but drank it all instead.

The owner of the South Broadway Manor Bed and Breakfast, Patricia Hill, found 104 bottles of Old Farm Pure Rye Whiskey when she bought the historic mansion and converted it into a bed and breakfast. It had originally belonged to Pittsburgh businessman J.P. Brennan.

The whiskey had been distilled in 1912 and given to Brennan in 1918, she told ABC News affiliate WTAE.

“There were four cases, 52 bottles, manufactured by an old distillery here in the Township that went out of business many years ago,” Barry Pritts, chief of police in Scottdale, Pa., said today.

He said the bottles had been made and sold before Prohibition and then passed down.

The Old Farm Pure Rye Whiskey was part of a collection of historical whiskey believed to have been consumed by Henry Frick and Andrew Carnegie in the early 1900s in Pittsburgh, Rick Bruckner, the chef at the South Broadway Manor, told WTAE.

John Saunders, 62, was a caretaker who lived in the basement and was expected to safeguard the booze.

“You know, to watch over them and keep them secure. I guess that was a mistake,” Pritts said.

Saunders denied that he consumed the vintage alcohol, but police tested the empty bottles to see if they matched Saunders’ DNA. After seven months of testing, police confirmed that Saunders’ DNA was found on the bottles, and charged him with felony theft and receiving stolen property, Pritts said.

Saunders appeared for a preliminary hearing in court on Wednesday and will face trial.

The question is, was it any good?

UPDATE (James Joyner): Never having heard of Old Farm Pure Rye Whiskey, a bit of research reveals that it was distilled by one Abraham Overholt, the namesake of Old Overholt.

[F]rom 1810 until 1919 the most popular whiskey in the U.S. was Pennsylvania Rye. Some studies suggest that 19th-century Americans drank as much as six times more rye whiskey per capita than they do today. This started before the corn whiskies of Kentucky even had a name.

Legally, rye whiskey is subject to the same stipulations as Bourbon: distilled to no more than 160 proof (80 percent alcohol by volume); aged in charred, new oak barrels (at not more than 125 proof); and, if aged for at least two years, may be designated as “straight.” The only real difference between the two in terms of production is the source material. Bourbon must be at least 51 percent corn, and rye must be at least 51 percent rye. Technically speaking, the difference can be as little as 2 percent, but the percentages are usually much higher.

In 1810, Abraham Overholt (whose picture appears the Old Overholt bottle) decided to take the family’s private distilling practices public. At the family’s homestead in West Overton, Pa., he began to produce Old Farm Pure Rye whiskey. He began producing about eight gallons a day, but soon was producing nearly 200. Some of the family then began to make other whiskey in nearby Broad Ford, under a variety of names, including Old Monongahela and A. Overholt. In 1860, the Old Farm distillery was demolished and a six-story building was built, which still stands today. It now houses the West Overton Museum and is a stop on the American Whiskey Trail.

Abraham Overholt died in 1870, and his family later began producing Old Overholt at the Broad Ford distillery. Prohibition later did what Washington’s army couldn’t: It virtually destroyed Pennsylvania Rye. The Overton Distillery closed in 1920, but the Broad Ford plant was allowed to produce “medicinal spirits” during the ban. Of the dozens of Pennsylvania distilleries that existed before Prohibition only Old Overholt survived it, albeit no longer owned by the Overholt family.

This new Old Overholt migrated first to Cincinnati then in 1987 moved to Kentucky where it is now owned by Jim Beam Inc., putting an anticlimactic end to Pennsylvania Rye whiskey.

A proud heritage although I must say that I’m not a huge fan of the Old Overholt, at least the current incarnation.