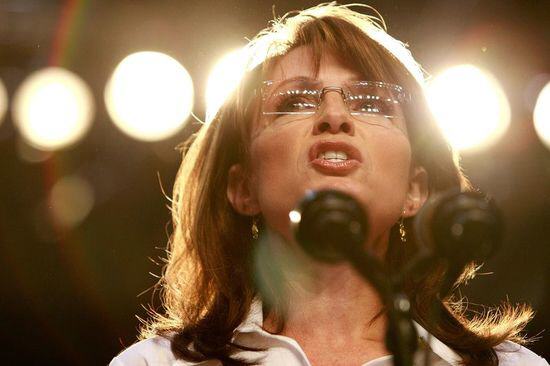 The Atlantic’s Joshua Green observes that this is “One of many things that suggests that profit, and not the presidency, is what’s motivating Palin.”

Sarah Palin has become an industry. The former Alaskan governor has had books deals, starred in a reality television show and set up a political PAC that raised $3.5 million last year. Through midterm election endorsements, broadcast on her 2.7 million-fan Facebook page or via her 400,000 follower Twitter feed, Palin has cemented alliances to new GOP governors such as South Carolina’s Nikki Haley and various members of Congress.

But Palin is more than just a former mayor, governor, vice presidential candidate and political force. She has catapulted over most politicians to a status of entertainment icon. She has become a brand — and she’s trying to protect it by trademarking her name.

The Palin brand is so valuable, that other family members are in on it. Sarah Palin’s 20-year-old daughter, Bristol, is a well-compensated spokeswomen on sexual abstinence for the Candie’s Foundation, has become a reality star in her own right on “Dancing with the Stars” and may land a job as a radio show host in Arizona.

Celebrities often trademark their names to protect their image or brand from others who might try to cash in on their likeness or use their name in an inappropriate way.

For Sarah Palin’s application, there are two classes of commercial service for which her name would be a registered trademark. One is for “information about political elections” and “providing a website featuring information about political issues.” The second is for “educational and entertainment services … providing motivational speaking services in the field of politics, culture, business and values.”

The “Bristol Palin” application is for “educational and entertainment services, namely, providing motivational speaking services in the field of life choices

Politicians seldom trademark their name but they might do so to prevent others from using it, for example, to sell shoddy, unapproved merchandise or “official” candidate memorabilia. A search for other political figures such as President Barack Obama and potential 2012 GOP presidential candidates Mike Huckabee, Tim Pawlenty and Mitt Romney do not show any pending trademark applications. It is a rarity, say trademark attorneys, for political figures to file such forms.

Both Palins are public figures, so they can’t prevent people writing and commenting about them. But this registration presumably makes it harder to sell merchandise using their names. Here’s an excerpt from an overview of trademark rights on the Harvard website:

If a party owns the rights to a particular trademark, that party can sue subsequent parties for trademark infringement. 15 U.S.C. �� 1114, 1125. The standard is “likelihood of confusion.” To be more specific, the use of a trademark in connection with the sale of a good constitutes infringement if it is likely to cause consumer confusion as to the source of those goods or as to the sponsorship or approval of such goods. In deciding whether consumers are likely to be confused, the courts will typically look to a number of factors, including: (1) the strength of the mark; (2) the proximity of the goods; (3) the similarity of the marks; (4) evidence of actual confusion; (5) the similarity of marketing channels used; (6) the degree of caution exercised by the typical purchaser; (7) the defendant’s intent. Polaroid Corp. v. Polarad Elect. Corp., 287 F.2d 492 (2d Cir.), cert. denied, 368 U.S. 820 (1961).

So, for example, the use of an identical mark on the same product would clearly constitute infringement. If I manufacture and sell computers using the mark “Apple,” my use of that mark will likely cause confusion among consumers, since they may be misled into thinking that the computers are made by Apple Computer, Inc. Using a very similar mark on the same product may also give rise to a claim of infringement, if the marks are close enough in sound, appearance, or meaning so as to cause confusion. So, for example, “Applet” computers may be off-limits; perhaps also “Apricot.” On the other end of the spectrum, using the same term on a completely unrelated product will not likely give rise to an infringement claim. Thus, Apple Computer and Apple Records can peacefully co-exist, since consumers are not likely to think that the computers are being made by the record company, or vice versa.

Between the two ends of the spectrum lie many close cases, in which the courts will apply the factors listed above. So, for example, where the marks are similar and the products are also similar, it will be difficult to determine whether consumer confusion is likely. In one case, the owners of the mark “Slickcraft” used the mark in connection with the sale of boats used for general family recreation. They brought an infringement action against a company that used the mark “Sleekcraft” in connection with the sale of high-speed performance boats. Because the two types of boats served substantially different markets, the court concluded that the products were related but not identical. However, after examining many of the factors listed above, the court concluded that the use of Sleekcraft was likely to cause confusion among consumers. AMF Inc. v. Sleekcraft Boats, 599 F.2d 341 (9th Cir. 1979).

In addition to bringing an action for infringement, owners of trademarks can also bring an action for trademark dilution under either federal or state law. Under federal law, a dilution claim can be brought only if the mark is “famous.” In deciding whether a mark is famous, the courts will look to the following factors: (1) the degree of inherent or acquired distinctiveness; (2) the duration and extent of use; (3) the amount of advertising and publicity; (4) the geographic extent of the market; (5) the channels of trade; (6) the degree of recognition in trading areas; (7) any use of similar marks by third parties; (8) whether the mark is registered. 15 U.S.C. � 1125(c). Kodak, Exxon, and Xerox are all examples of famous marks. Under state law, a mark need not be famous in order to give rise to a dilution claim. Instead, dilution is available if: (1) the mark has “selling power” or, in other words, a distinctive quality; and (2) the two marks are substantially similar. Mead Data Central, Inc. v. Toyota Motor Sales, U.S.A., Inc., 875 F.2d 1026 (2d Cir. 1989).

Once the prerequisites for a dilution claim are satisfied, the owner of a mark can bring an action against any use of that mark that dilutes the distinctive quality of that mark, either through “blurring” or “tarnishment” of that mark; unlike an infringement claim, likelihood of confusion is not necessary. Blurring occurs when the power of the mark is weakened through its identification with dissimilar goods. For example, Kodak brand bicycles or Xerox brand cigarettes. Although neither example is likely to cause confusion among consumers, each dilutes the distinctive quality of the mark. Tarnishment occurs when the mark is cast in an unflattering light, typically through its association with inferior or unseemly products or services. So, for example, in a recent case, ToysRUs successfully brought a tarnishment claim against adultsrus.com, a pornographic web-site. Toys “R” Us v. Akkaoui, 40 U.S.P.Q.2d (BNA) 1836 (N.D. Cal. Oct. 29, 1996).

9. What other potential causes of action are there?

10. What defenses are there to trademark infringement or dilution?

Defendants in a trademark infringement or dilution claim can assert basically two types of affirmative defense: fair use or parody. Fair use occurs when a descriptive mark is used in good faith for its primary, rather than secondary, meaning, and no consumer confusion is likely to result. So, for example, a cereal manufacturer may be able to describe its cereal as consisting of “all bran,” without infringing upon Kelloggs’ rights in the mark “All Bran.” Such a use is purely descriptive, and does not invoke the secondary meaning of the mark. Similarly, in one case, a court held that the defendant’s use of “fish fry” to describe a batter coating for fish was fair use and did not infringe upon the plaintiff’s mark “Fish-Fri.” Zatarain’s, Inc. v. Oak Grove Smokehouse, Inc., 698 F.2d 786 (5th Cir. 1983). Such uses are privileged because they use the terms only in their purely descriptive sense.

Some courts have recognized a somewhat different, but closely-related, fair-use defense, called nominative use. Nominative use occurs when use of a term is necessary for purposes of identifying another producer’s product, not the user’s own product. For example, in a recent case, the newspaper USA Today ran a telephone poll, asking its readers to vote for their favorite member of the music group New Kids on the Block. The New Kids on the Block sued USA Today for trademark infringement. The court held that the use of the trademark “New Kids on the Block” was a privileged nominative use because: (1) the group was not readily identifiable without using the mark; (2) USA Today used only so much of the mark as reasonably necessary to identify it; and (3) there was no suggestion of endorsement or sponsorship by the group. The basic idea is that use of a trademark is sometimes necessary to identify and talk about another party’s products and services. When the above conditions are met, such a use will be privileged. New Kids on the Block v. News America Publishing, Inc., 971 F.2d 302 (9th Cir. 1992).

Finally, certain parodies of trademarks may be permissible if they are not too directly tied to commercial use. The basic idea here is that artistic and editorial parodies of trademarks serve a valuable critical function, and that this critical function is entitled to some degree of First Amendment protection. The courts have adopted different ways of incorporating such First Amendment interests into the analysis. For example, some courts have applied the general “likelihood of confusion” analysis, using the First Amendment as a factor in the analysis. Other courts have expressly balanced First Amendment considerations against the degree of likely confusion. Still other courts have held that the First Amendment effectively trumps trademark law, under certain circumstances. In general, however, the courts appear to be more sympathetic to the extent that parodies are less commercial, and less sympathetic to the extent that parodies involve commercial use of the mark.

Fair Use and parody carve out any of the uses for Palin’s name that I would have.