Fitness guru Jack LaLanne has succumbed to the inevitable at the ripe old age of 96. 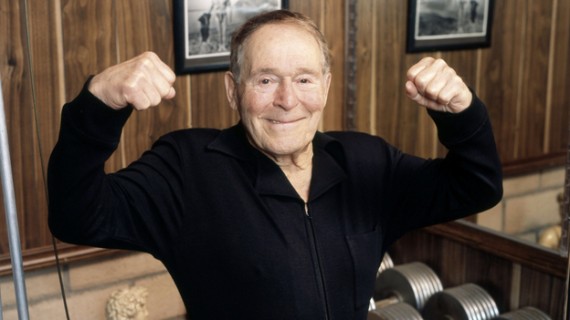 Fitness guru Jack LaLanne has succumbed to the inevitable at the ripe old age of 96.

Jack LaLanne, who devoted his life to making Americans fit and healthy, died of respiratory failure from pneumonia Sunday at his home in Morro Bay, Calif. He was 96.

Before there was power yoga and Tae-Bo, there was LaLanne. He became the fitness conscience of the nation after his daily TV show on exercise and nutrition debuted in the 1950s, running for more than three decades. For many Americans, he is a memory, a quirky part of cultural history. But up to the end of his life, he remained as dedicated as ever to getting the country in shape.

Goldman reminisces on a 2004 visit:

I was told to be there between 7 and 7:30 in the morning. That’s when LaLanne finishes his daily two-hour workout — not bad for an 89-year-old. Still, as I drove to his home in the rolling hills near the central California coast, I wondered how much old age had changed him from his TV days, from the image of a young and vital LaLanne, trim and muscular in his trademark one-piece jumpsuit. He was the perfect balance of chirpy optimism — “you can do it!” — and drill sergeant discipline, counting, forever counting as he led the exercises, “one…two…three….four!”

When I finally meet LaLanne, he is — what else? — counting his way through a morning workout. Wearing a bright red bathing cap and blue swim trunks, he’s doing water resistance exercises in an outdoor Jacuzzi. The rippled weightlifter’s physique is gone and there’s an 89-year-old’s sag here and there, but there is muscle definition in the arms and shoulders. When he turns away, his back is broad.

When he was 15, LaLanne attended a lecture by a health nutritionist who told audience members they could be born again if they obeyed nature’s laws: exercise and eat proper food. Young, impressionable Jack was hooked. The next day, he says, he stopped eating sugar, became a vegetarian and joined the YMCA in Berkeley, Calif.

Did he ever miss a day? Ever have any doubt about his lifestyle change?

LaLanne hasn’t had a sugary dessert or missed a daily workout since 1930. On some birthdays, he’s done stunts like swimming from Alcatraz Island to San Francisco in handcuffs or doing a thousand pushups in 19 and a half minutes. Impossible standards for most, but the art of Jack LaLanne has always been that he doesn’t expect people to be Jack LaLanne. Be yourself, he says. Find the time three or four days a week to get the blood flowing and the muscles working.

I’m going to be ninety in September. Everybody else can have a piece of the birthday cake, but not me. I have rules, and I follow ’em. No cake, no pie, no candy, no ice cream! Haven’t had any in seventy-five years. It makes me feel great not eating birthday cake. That’s the gift I give myself.

Forget about what you used to do. This is the moment you’ve been waiting for.

If man makes it, don’t eat it.

Of course I have fears. But what good is thinking or talking about them? Billy Graham is about the hereafter. I’m for the here and now.

You’ve got to satisfy you. If you can’t satisfy you, you’re a failure.

I work out for two hours every morning, seven days a week — even when I’m traveling. I hate it. But I love the result! That’s the key, baby!

Then there’s this one, a homily I remember watching LaLanne decades ago:

Would you get your dog up every day, give him a cup of coffee, a doughnut, and a cigarette? Hell, no. You’d kill the damn dog.

The man’s commitment is admirable, if unrealistic for most of us. But these are words to live by:

Scales lie! You lose thirty pounds of muscle and you gain thirty pounds of fat and you weigh the same, right? Take that tape measure out. That won’t lie. Your waistline is your lifeline. It should be the same as it was when you were a young person.

Not words I’m living by, mind you. But they’re true.