Politico (Jay Carney got $270K from Time magazine after leaving) has uncovered a major payola scandal. Or is hyping a complete non-story. 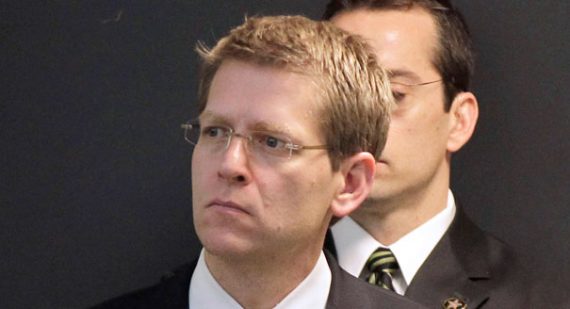 Politico (“Jay Carney got $270K from Time magazine after leaving“) has uncovered a major payola scandal. Or is hyping a complete non-story.

Not long after President Barack Obama’s historic 2008 victory, Jay Carney left his perch as TIME magazine’s Washington bureau chief to work for the incoming administration. But Carney, who started a new job as press secretary this week, continued reaping payments from the struggling magazine, collecting $270,000 in 2009, according to a newly released disclosure form.

Carney’s personal financial disclosure statement, released by the White House Monday evening, shows that in 2009 TIME paid him a $58,000 bonus — for work he did in 2008, when he helped direct the magazine’s coverage of the presidential campaign — as well as a $212,000 severance payment.

Getting a bonus for 2008 in 2009 isn’t unusual. But that’s a helluva severance payment for a magazine that’s going broke. Is it standard practice?

Such severances are typically given to journalists who accept buyouts, an increasingly common phenomenon in the contracting journalism industry. In fact, TIME had cut 20 staffers from its payroll through buyouts and layoffs in the days before Carney resigned in December 2008, which was described in a staff-wide memo as a decision by Carney to “mov[e] on to a new challenge. … which we will hear about shortly.”

Hours after the memo was circulated, it was revealed that Carney would become a top aide to then-incoming Vice President Joe Biden.

The White House did not respond when asked whether Carney’s severance payment stemmed from a buyout or was part of a different arrangement.

Regardless, the payments likely helped soften the impact of the pay cut Carney took when he left TIME, where he earned $231,000 in 2008, according to his disclosure form from that year, which also shows that he collected $27,500 in speaking fees in 2008 from associations such as the American Society of Safety Engineers, Northwest Missouri State University and the Denver Town Hall Lecture Series.

That “Regardless” is doing an awful lot of work there. Either Carney did something untoward — and there’s no evidence here that he did — or this is a total non-story.

Two years ago, when Carney left TIME for Joe Biden’s staff, I expressed consternation that an ostensibly objective journalist would leave to become a politico and some concern that there was a conflict of interest in his working as a press flack for Biden while his wife, Claire Shipman, continued on as a major political reporter for ABC News.

But Carney is certainly entitled to be paid for work he did for Time-Warner, a for-profit company, before joining the administration. A $58,000 bonus strikes me as inordinately high for someone making a $231,000 salary. But, given no evidence to the contrary, I’ll presume that’s simply how his pay was structured. And, if TIME was offering buyouts, it’s hardly shocking that Carney — knowing he was on his way out — would sign up. It’s not like he can go back to work in his old job after leaving the White House.