President Trump's latest financial disclosure finally acknowledges that he reimbursed Michael Cohen for the payoff to buy the silence of Stormy Daniels. 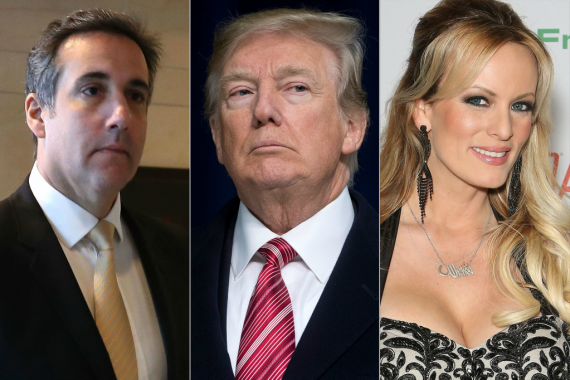 Yesterday, President Trump released his latest financial disclosure in which he acknowledges for the first time his reimbursement of Michael Cohen for the $130,000 paid to adult film actress Stormy Daniels on the eve of the 2016 election:

President Trump’s financial disclosure, released on Wednesday, revealed for the first time that he paid more than $100,000 to his personal attorney, Michael D. Cohen, as reimbursement for payment to a third-party.

The disclosure, released by the Office of Government Ethics, did not specify the purpose of the payment. However, Mr. Cohen has paid $130,000 to an adult film actress, Stephanie Clifford, who has claimed she had an affair with Mr. Trump.

Mr. Cohen has said he made the payment to keep the actress, who goes by the stage name Stormy Daniels, from going public before the 2016 election with her story about an affair with Mr. Trump.

A footnote in the disclosure said that Mr. Cohen had requested reimbursement of the expenses incurred in 2016 and Mr. Trump had repaid it in full in 2017. It did not give an exact amount of the payment but said it was between $100,001 and $250,000.

Mr. Trump’s disclosure of the 2016 payment to Mr. Cohen raises the question of whether he erred in not reporting the debt on last year’s disclosure form. The document released Wednesday said that Mr. Trump was reporting the repaid debt “in the interest of transparency” but that it was “not required to be disclosed as reportable liabilities.”

Yet a letter accompanying the report sent to Rod J. Rosenstein, the deputy attorney general, from the government ethics office’s acting director, David J. Apol, said that the Office of Government Ethics had determined “the payment made by Mr. Cohen is required to be reported as a liability.”

The 92-page disclosure covers only calendar year 2017, unlike last year’s filing, which spanned nearly a 16-month period. It also provides much less specificity than his tax returns, which he has refused to make public.

Still, the disclosure provides the first extended look at the performance of Mr. Trump’s Washington hotel, which opened in September 2016 and has become a magnet for lobbyists and Republican aides. The hotel is one of his best performing properties, and the disclosure listed revenues of $40.4 million.

And Mr. Trump’s Mar-a-Lago resort in Florida, which the president frequents in the winter months, saw revenues of $25.1 million. Last year’s filing listed revenues over a 16 month period at Mar-a-Lago of $37.3 million.

Earlier this month, of course, the newest member of the President’s legal team, former New York Mayor Rudy Giuliani, made headlines when he revealed during a Fox News Channel interview that Trump had reimbursed Michael Cohen for the payment that was made to Daniels. Prior to that statement, both Trump and Cohen had denied that Trump had any knowledge of the agreement that Cohen had negotiated with Daniels and Cohen had stated that he had paid the $130,000 out of his own pocket via a line of credit that utilized his in-laws home as collateral. Additionally, the President had specifically denied any knowledge of Cohen’s dealings with Daniels or of the payment to Daniels. He also stated that he never reimbursed Cohen for the payment. As for Cohen, before he stopped speaking to the media after Federal authorities executed a search warrant at his office, home, and hotel room, his statements mirrored what the President stated and claimed that he President had no knowledge of his dealings with Daniels or anyone else on Trump’s behalf. Leaving aside the fact that these claims were implausible from the beginning, this disclosure confirms that what Giuliani said earlier this month was accurate and that both Trump and Cohen had lied in their previous statements on the matter.

As I’ve noted in the past, while the salacious details regarding Trump’s affair with Daniels while his wife was pregnant with his youngest child is a large part of the reason this case is gaining attention, there are some real legal issues implicated by this payment and the circumstances surrounding it:

The payment to Daniels has gotten attention largely thanks to the salacious details that Daniels has revealed about her relationship with Trump and the fact that the President’s statements on the matter have been, shall we say, inconsistent. However, as I’ve noted in the past, there are potentially serious legal consequences involved here as well that could come back to bite both Cohen and Trump. Additionally the recent revelations about what the President may have known about the payment from Cohen to Daniels, when he knew it, and the apparently now established fact that he ultimately reimbursed Cohen for the payment could give investigators grounds to expand the investigation of Trump’s personal and business finances both in connection with the Cohen investigation in New York and the investigation being led by Robert Mueller into Russian interference with the 2016 election and ties between the Trump campaign and Russian official.

The most paramount legal implication comes from the potential violation of campaign finance laws. If it can be established that the payment to Daniels was made primarily out of the fear that her allegations could become public immediately prior to the 2016 election then that payment could be interpreted as being an illegal in-kind campaign contribution. In that regard, Giuliani has tried to clarify his initial claims by saying that the primary motive for the payment was to prevent the story from becoming public and embarrassing the President and his wife. However, this contradicts statements that Giuliani himself had made on Wednesday night and Thursday morning that made it clear that the primary motive for the payment was to protect the campaign. Additionally, the fact that this agreement was suddenly entered into some ten years after the alleged Trump-Daniels relationship had ended and just about two weeks prior to the 2016 election seems to be a fairly strong indication of what the true intent of the payment actually was.

In addition to potential violations of campaign finance laws, there are also other potential legal issues that could be implicated by the way the payment to Daniels was structured, and the way the reimbursement to Cohen was structured. These include potential money laundering charges as well as fraud charges related to the failure to reveal the true source of the payments. Since Cohen apparently used a loan to get the initial funds to pay Daniels, then there could also be potential bank fraud charges as well as income tax issues that could have implications for Cohen, Daniels, and Trump. Finally, the manner in which Cohen acted in connection with this transaction seems to clearly violate several provisions of the disciplinary rules that govern attorneys licensed to practice law in New York, most especially those that prohibit attorneys from advancing anything other than costs of litigation (i.e., filing fees, deposition costs, expert witness fees, etc) on behalf of their client. This isn’t an issue for Trump, of course, but it is another potential headache for Cohen that could factor into any decision on his part about whether or not he should cooperate with prosecutors and enter into some kind of plea agreement.

In addition to the campaign law violations, which wouldn’t necessarily lead to criminal charges, Giuliani’s admission also opens up the potential that the payment to Daniels could give rise to other potential criminal charges. The fact that Cohen was apparently reimbursed surreptitiously for the payment to Daniels, among other things, raises potential money laundering issues, for example. Additionally, since Cohen has said in the past that he took out a bank loan for the purpose of making the payment to Daniels raises the possibility that there could be bank, wire, and mail fraud issues could be implicated by this payment. Finally, there is the fact that even though Trump’s past statements about Daniels and the payment completely contradict what Giuliani said last night, and what the President tweeted this morning this could nonetheless have a serious impact on the President’s credibility in any legal proceedings related to this matter going forward. Rather than make things better for his client, Giuliani has made things much, much worse both from a legal and a public relations point of view.

On top of all of this, Trump’s acknowledgment of the payment in his financial disclosure raises an entirely different set of legal implications. Under Federal law, willfully failing to disclose required information on these forms is considered a Federal crime. This is the reason why the Office of Government Ethics referred this matter to Deputy Attorney General Rod Rosenstein, who of course is overseeing both the Russia investigation and the investigation of Michael Cohen being conducted by the United States Attorney for the Southern District of New York. What Rosenstein does with this information is unclear, especially since it’s clear based on legal conclusions that the Justice Department reached during the Nixon Administration that a sitting President cannot be indicted in Federal Court. Nonetheless, it does add to the legal minefield that Trump and Cohen both face due to the October 2016 agreement. Where that goes from here is something only time will tell us.

And here the Office of Government Ethics letter to Deputy Attorney General Rosenstein: