There's been a palace coup at The Heritage Foundation. 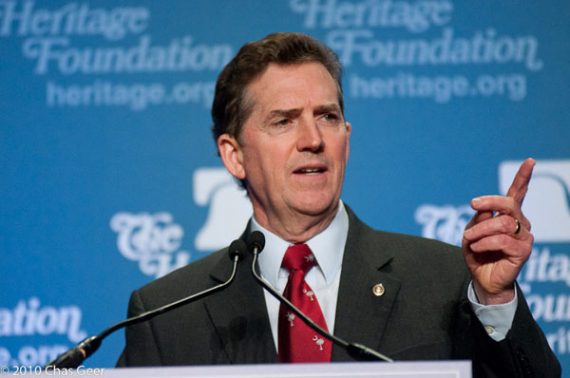 In a tersely worded press release late yesterday afternoon, the Board of Trustees at the Heritage Foundation announced that former Senator Jim DeMint had resigned as President and CEO of the organization, a position he held since leaving the Senate in 2013:

The Heritage Foundation on Tuesday announced president Jim Demint’s resignation, blaming him for “significant and worsening management issues that led to a breakdown of internal communications and cooperation.”

“Jim DeMint and a handful of his closest advisers failed to resolve these problems,” a statement from the conservative group said.

The foundation’s board of trustees asked for and received the former senator’s resignation after a unanimous vote, the statement said.

DeMint took over the conservative think tank in 2013 after serving as a South Carolina senator since 2005.

In a Tuesday evening statement, DeMint said, “I’m grateful to have worked with some of the greatest minds and talents in America and believe we’ve accomplished together what we set out to do.”

“The public statement released earlier is puzzling given that the board of trustees has praised our work for four years and approved performance bonuses for the entire management team each year for a job well done,” he added.

DeMint went on to tout Heritage’s “most successful impact on a presidential transition team since the days of Ronald Reagan, culminating in the confirmation of Judge Gorsuch and one of the best presidential cabinets in recent history.”

Over the past several weeks at least, there have been several signs that there were moves afoot among some forces at Heritage directed at pushing DeMint out of the way. Several of those reports indicated that many of the older hands on the Board of Trustees, such as Heritage found Ed Feulner, were displeased with the manner in which Heritage has seemed to lose its place as a respected public policy institution under DeMint’s leadership and has instead turned into something more activist through efforts such as Heritage Action, an organization that is technically separate from the Foundation and engages in advocacy and lobbying in much the same way as groups such as FreedomWorks and other organizations that have come to be associated with the Tea Party and, at least loosely, the pro-Trump wing of the Republican Party. This came to a head earlier this year when Heritage joined with other conservative activist groups to pressure Congress to reject the American Health Care Act, the Republican bill to repeal and replace the Affordable Care Act. In Heritage’s case, this change was a radical change from the day when the organization was essentially a clearinghouse for public policy research that, while generally conservative, was open to opposing points of view. It was Heritage, after all, that first proposed the basic outlines of what became the health care legislation that was passed into law when Mitt Romney was Governor which in turn was in many ways the progenitor for the substance of the Affordable Care Act. Under DeMint’s leadership, Heritage deviated from that path and became far more partisan, and far more closely tied to the Trump Administration. At least according to some reports, one of the motivations behind removing him was to return the organization to its roots, and the fact that Feulner himself is back as President and CEO seems to indicate that this is where the Board of Trustees wants to see the organization go in the future.

Politico’s Elania Johnson and Nancy Cook report on what was going on behind the scenes:

Jim DeMint’s ouster from The Heritage Foundation came as a shock to the hundreds of scholars and staffers who’ve seen the organization’s political influence grow thanks to DeMint’s controversial decision to align the leading conservative think tank closely with Donald Trump.

But interviews with over a dozen sources at the center of the drama suggest Heritage’s stewards — particularly DeMint’s predecessor, Ed Feulner, and Feulner’s sharp-elbowed protégé, Mike Needham — became convinced that DeMint was incapable of renewing the foundation’s place as an intellectual wellspring of the conservative movement.

Ironically, it was Feulner’s decision in 2010 to create an advocacy organization, Heritage Action, and to install Needham atop it, that sowed the seeds of DeMint’s fall. Though the think tank and the advocacy arm are legally separate entities, several sources familiar with the institution’s internal dynamics say that both organizations became increasingly focused on mediating fights among congressional Republicans rather than on generating policy ideas. The problem existed before DeMint took the helm of Heritage in 2013, but has mushroomed since, Heritage insiders said.

But if DeMint wasn’t the source of the problem, sources say, board members concluded he wasn’t the solution, either.

“When DeMint went in, Heritage became very political. It changed from a highly respected think tank to just a partisan tool and more ideological — more of a tea party organization than a think tank,” said Mickey Edwards, one of the organization’s founding trustees and a former Republican congressman from Oklahoma. “Hopefully, Feulner, if he takes over, can help reestablish Heritage as what it used to be during the Reagan years.”

Disputes over the organization’s mission stretch back a year. In many ways, they reflect the larger intellectual and organizational disarray among conservatives exposed by the rise of Trump, and exacerbated by his victory. Many of the institutions that have sustained the conservative movement are grappling with their role at a time when conservatism is on the wane — and with how to work constructively with a populist in the White House.

The Heritage Foundation on Friday issued a blanket directive to its employees not to comment on the leadership change and canceled all of the weekly meetings it hosts with Republican aides on Capitol Hill.

Tuesday’s events were the culmination of repeated clashes between DeMint, on one side, and Feulner and Needham on the other. DeMint, who at one point suggested he would retire this year, announced at a senior management meeting several months ago that he intended to extend his contract. Even at that point, his relationship with Needham had become so strained that the news caused Needham to throw a chair across the room after DeMint left, according to a Heritage staffer.

Over the past several days, dueling narratives about the events leading to the board’s decision have emerged. DeMint’s defenders, legion on Capitol Hill, say the 35-year-old Needham, known as a political wunderkind, orchestrated DeMint’s ouster with an eye to taking control of the foundation in the coming years. Heritage Action has hammered Republicans from the right and Needham is widely disliked among GOP lawmakers.

A senior Republican Senate aide said Needham had been laying the groundwork to overthrow DeMint for more than a year and set about to convince board members one by one.

“I think a lot of board members are being told what Mike Needham thinks they want to hear,” the person said.

Needham’s allies say that DeMint was a disappointing steward who led a once-venerable but declining organization into further chaos. A member of the board insisted that, as of Tuesday, the board had no clear candidate in mind to replace DeMint, and that Needham had not engineered his removal.

“In my view, it’s about the institution,” the board member said.

The Needham camp insists that, despite his bombastic public profile, both he and Feulner grew increasingly concerned with the decline of The Heritage Foundation’s role as the brain trust of the Republican Party. DeMint’s and Needham’s motives “are the opposite of what you would expect based on their institutions and positions,” said one Republican policy maven — with Needham, the advocacy head, concerned about the think tank’s position as an idea generator, and DeMint, the think tank head, inclined to transform it into an activist organization.

Needham did not respond to a request for comment.

At the root of the drama is a longing among conservatives — particularly acute now that Republicans control both the White House and Congress — for a return to the days when their institutions and ideas enjoyed a singular influence in Washington and across the country.

In 1981, a newly elected President Ronald Reagan distributed The Heritage Foundation’s 3,000-page set of policy recommendations, known as the Mandate for Leadership, at his first Cabinet meeting. As thousands of the foundation’s recommendations were adopted, they made an indelible mark on the administration.

The passing of the baton back to Feulner marks an attempt, both literally and figuratively, to return to those days.

“Heritage’s academic credentials were much greater under Feulner than DeMint. Hopefully, Feulner, if he takes over, can help reestablish Heritage as what it used to be during the Reagan years,” Edwards said.

Given the extent to which DeMint’s leadership and the change in Heritage’s mission that occurred largely under his tenure, it’s hard to say whether or not his opponents on the board will succeed in their efforts to remake Heritage into something akin to what it was during the Reagan Era. The fact that there are so many more such think tanks and public policy organizations in Washington today, including groups such as the American Enterprise Institute and Cato, both of which existed at the time of the Reagan Presidency but have gained in prominence in the intervening decades, may make that project more difficult than they think it is though. Additionally, the fact that Needham remains at Heritage Action may mean that he’ll end up using DeMint’s absence to push both Heritage Action and the foundation in an activist direction more to his liking. Only time will tell who succeeds in that effort.

As for DeMint himself, only time will tell what becomes of him. His statement last night regarding his departure was rather defiant, so one assumes he’s still interested in being part of the political debate in Washington or elsewhere. He could end up at the head of some other organization, or he could end up trying to make a comeback in South Carolina politics. In that regard, the possibilities are somewhat limited, though. There’s a Governor’s race coming up in the Palmetto State in 2018, but that would involve challenging the current Governor Henry McMaster, who was sworn into the office after Nikki Haley was confirmed as Ambassador to the United Nations. Alternatively, Senator Lindsey Graham will be up for re-election in 2020 and he has been a frequent target for conservatives in the past. The effort to unseat him in 2014 went absolutely nowhere largely because the most prominent potential South Carolina Republicans declined to run against him. It’s unclear, though, if Graham will decide to run for a fourth term in 2020 when he will be sixty-five years old. If he doesn’t then one could easily see DeMint try to use the vacancy to make a political comeback if he passes on running for Governor.