This handshake on August 14, 1980 in Madison Square Garden put an end to the public contest between President Carter and Senator Kennedy, but now the former President has decided it's time to reopen old wounds. 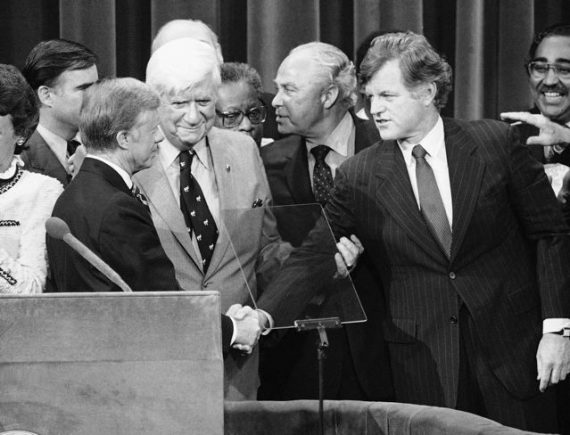 Senator Ted Kennedy has been dead for more than a year now, so apparently former President Carter feels it’s now appropriate to make it clear that he still holds a grudge against the guy who nearly defeated him for the Democratic nomination in 1980:

Carter revisited the old spat in an interview with CBS’s “60 Minutes” to be aired Sunday. Portions of the interview, prompted by the publication of his White House diary, were posted on the program’s Web site Thursday.

“The fact is that we would have had comprehensive health care now had it not been for Ted Kennedy’s deliberately blocking the legislation that I proposed,” Carter said in the interview. “It was his fault. Ted Kennedy killed the bill.” Carter cast his Democratic rival as spiteful. “He did not want to see me have a major success in that realm of life,” Carter said.

The disagreement over health care is noted in Carter’s latest book, “White House Diary.” According to a “60 Minutes” statement, Carter wrote at the time: “Kennedy continuing his irresponsible and abusive attitude, immediately condemning our health plan. He couldn’t get five votes for his plan.” Kennedy and Carter had competing health-care plans while Carter was president. Kennedy favored a more comprehensive approach that would have insured all Americans against health-care costs regardless of age or income. Carter backed a more moderate proposal that would have been phased in over several years.

In his 2009 memoir, “True Compass,” Kennedy blamed Carter for dragging his feet on health care and wrote that Carter viewed his health-care efforts as a platform to challenge his presidency.

“If that’s why he slowed things down, then he made a poor political calculation,” Kennedy wrote. “If we had passed comprehensive national health insurance together, it would have been a huge victory for Carter.” When asked in interviews about his biggest regret as a senator, Kennedy often recalled his failure to make a deal to pass President Richard Nixon’s sweeping health-care proposal in the early 1970s. Kennedy said that at the time he did not think it went far enough.

CBS has already released video from the interview:

I’m neither a Kennedy nor a Carter fan, but it strikes me as pretty classless to unload on a guy like this after he’s dead over a political dispute that was over 30 years ago.