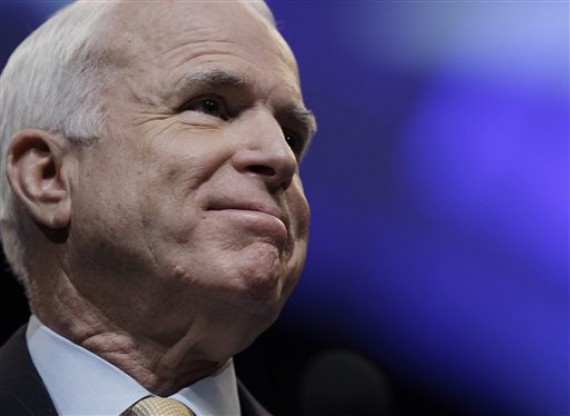 John McCain is no fan of the Tea Party’s influence in the debt ceiling debate:

Is the old John McCain back?

The fiery, independent version of the Republican senator from Arizona took to the floor of the Senate Wednesday morning. Demanding “straight talk,” Mr. McCain accused conservatives of abandoning reason by opposing the House Republican leader’s plan to resolve the debt crisis.

Mr. McCain mocked Tea Party-allied Republicans in the House for believing — wrongly, he said — that President Obama and Democrats will get the blame for a default if Republicans refuse to increase the nation’s debt ceiling.

By that flawed logic, “Democrats would have no choice but to pass a balanced budget amendment and reform entitlements and the Tea Party Hobbits could return to Middle Earth,” he said, quoting a Wall Street Journal editorial.

“This is the kind of crack political thinking that turned Sharron Angle and Christine O’Donnell into G.O.P. nominees,” he jeered, referring to two losing Tea Party candidates for the Senate in 2010.

Mr. McCain assailed the conservative Republicans in the House who are threatening passage of the debt cutting plan by the House speaker, John A. Boehner, calling their political logic “bizarro” and noting sarcastically that they have only been in office a short time.

Of course McCain isn’t really well-liked among the Tea Party crowd to begin with. After all, they put up a candidate to try to defeat him in a primary last year. Nonetheless, harsh words like that on the Senate floor are indicative of a battle being fought right now inside the GOP over this and other issues. How it turns out wil be important to us all.

Here’s part of the speech: