Speaker Boehner told his caucus members that he will not allow a default over the debt ceiling but don't look for a change in strategy. 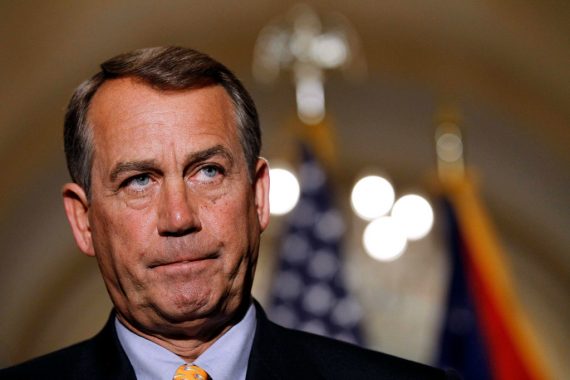 John Boehner is reportedly telling members of the House GOP Caucus that he does not intend to allow the nation to reach the point where breaching the debt ceiling means that the government defaults on its obligations:

WASHINGTON — With a budget deal still elusive and a deadline approaching on raising the debt ceiling, Speaker John A. Boehner has told colleagues that he is determined to prevent a federal default and is willing to pass a measure through a combination of Republican and Democratic votes, according to multiple House Republicans.

One lawmaker, who spoke on the condition of anonymity, said Mr. Boehner had indicated he would be willing to violate the so-called Hastert Rule if necessary to pass a debt-limit increase. The informal rule refers to a policy of not bringing to the floor any measure that does not have a majority of Republican votes.

A spokesman for Mr. Boehner pushed back on the idea that the speaker would try to pass a debt-limit increase mainly with Democratic votes, but acknowledged that the speaker understood the need to head off a default.

“The speaker has always been clear that a default would be disastrous for our economy,” Mr. Steel said. “He’s also been clear that a ‘clean’ debt hike cannot pass the House. That’s why the president and Senate Democrats should drop their ‘no negotiations’ stance, and work with us on a plan to raise the debt limit in a responsible way, with spending cuts and reforms to get our economy moving again and create jobs.”

It is conceivable that Mr. Boehner could pass a debt-limit increase with a slim majority of Republican votes, and Democrats making up the difference, as he has in the past on budget measures. In meetings with Republican lawmakers, the speaker appeared to be offering reassurances to members worried about the government shutdown that he would not allow a default to take place.

Other Republicans also said Thursday that they got the sense that Mr. Boehner would do whatever was necessary to ensure that the country did not default on its debt.

Representative Michael G. Fitzpatrick, Republican of Pennsylvania, who was one of just 22 House Republicans this year who helped Mr. Boehner pass three crucial bills — to avert a fiscal showdown, to provide relief for the victims of Hurricane Sandy, and to pass the Violence Against Women Act — with a majority of Democratic support, said he expected that he may be asked to do so again.

“Hurricane Sandy, the fiscal cliff, all of the big votes require reasonable Republicans and Democrats to come together in order to pass it and get it to the president’s desk,” he said. “This will be no different.”

And, Mr. Fitzpatrick added, “I’ve been there in the past, and I’m prepared to be there again.”

Representative Leonard Lance of New Jersey, one of the moderate Republicans who met privately with Mr. Boehner on Wednesday, would not provide details of the meeting, but said, “The speaker of the House does not want to default on the debt on the United States, and I believe he believes in Congress as an institution, and I certainly believe he is working for the best interests of the American people.”

Passing a measure with a majority of Democratic votes could cause trouble for Mr. Boehner from his right flank. He has so far refused to bring to the floor a measure that could halt the federal government shutdown but would require significant support from Democrats.

This news comes on the same day that the Treasury Department issued a report detailing the economic consequences of not raising the debt ceiling:

Warning of “a large, adverse, and persistent financial shock” this time around, Treasury highlighted the impact of lower consumer confidence, slower hiring, and increased market volatility after Congress came close to not raising the borrowing cap in 2011. “Between the second and third quarter of 2011, household wealth fell $2.4 trillion,” the department wrote. “[L]ower stock prices reduce retirement security – from the second to the third quarter of 2011, retirement assets fell $800 billion.”

Treasury warned that the current government shutdown puts the nation’s economic outlook at risk, something that would be exacerbated by another drawn-out debate over raising the borrowing limit. “We may be starting to see some tentative signs that the current debate is affecting financial markets,” the department wrote.

And if Congress does not raise the debt limit, raising the possibility of default if the government is unable to meet its bond obligations, Treasury said the results could be worse than the 2008 “Great Recession.”

“In the event that a debt limit impasse were to lead to a default, it could have a catastrophic effect on not just financial markets but also on job creation, consumer spending and economic growth—with many private-sector analysts believing that it would lead to events of the magnitude of late 2008 or worse, and the result then was a recession more severe than any seen since the Great Depression,” the report states.

Additionally, James Pethokoukis passes along a Goldman Sachs analysis that suggests that the prospect of a debt ceiling crisis is already starting to have an impact on financial markets: 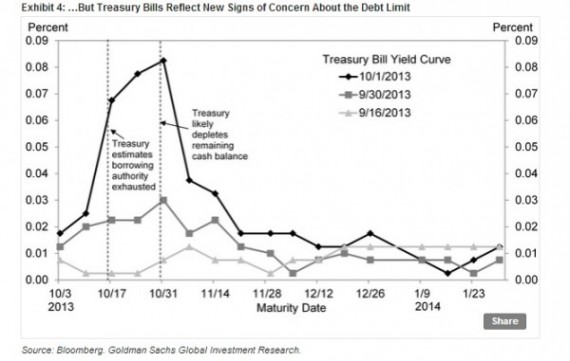 The Treasury bill market is clearly indicating concern about upcoming debt ceiling deadlines (Exhibit 4). In our view this is the direct result of the increasing acrimony in Washington. Starting with the bill maturing on October 17―the day the Treasury Department has suggested it would exhaust its borrowing authority―bill rates are elevated, suggesting lower investor appetite for holding these securities. The distortion in the bill curve is most apparent in the security maturing on October 31, just after Treasury is likely to have depleted its cash balance.  This unusual “humped” pattern is similar to that seen in late July 2011 during the last debt ceiling standoff.

Boehner’s position on the debt ceiling, of course, isn’t really all that different from the position he’s taken on the issue in the past. He said much the same thing during the debt ceiling crisis that paralyzed Washington for the better part of the summer of 2011, and yet, thanks largely to the intransigence of his own caucus, he found himself in the position of taking hard lines in negotiations with the President and Congressional Democrats. While there were several times when those negotiations appears to be on the verge of the so-called “Grand Bargain,” in the end we ended up with a deal that pretty much nobody liked and which has led to sequestration cuts that have had somewhat silly across the board impacts rather than being targeted in a rational matter. He could have violated the so-called “Hastert Rule” back then, and he didn’t do it. So, the suggesting that he will do it this time around seems rather fanciful at best.

Also, as Matthew Yglesias notes, it’s worth taking into account that the same article linked above also notes that Boehner continues to take the position that there will have to be negotiations over spending cuts and other issues as part of a debt ceiling deal, a position that the President is currently rejecting out of hand. Additionally, Ezra Klein reports these comments from Boehner’s spokesman:

I asked Boehner’s spokesman, Michael Steel, about the report. ”Speaker Boehner has always said that the United States will not default on its debt, but if we’re going to raise the debt limit, we need to deal with the drivers of our debt and deficits,” he e-mailed. “That’s why we need a bill with cuts and reforms to get our economy moving again.”

That’s what they call a non-denial denial. And it speaks to a deep problem Boehner’s team has never quite figured out how to resolve. On the one hand, Boehner has always said he won’t allow the United States to default. On the other hand, he’s also always said that he won’t pass a clean debt-ceiling bill.

So, to answer the question that Klein asked in the title to his post, no Boehner has not ended the debt ceiling debate. As far as the Republicans are concerned, that debate is still going on regardless of the position that the Administration is taking right now. As I noted earlier today in writing about the latest polls, it’s unclear just how long the Democrats can maintain their “no negotiations” strategy for either the debt ceiling or the government shutdown itself with the public overwhelmingly favoring the idea of the parties negotiating with each other. At some point, they are going to have to sit down and talk, and it’s going to have to be something a lot more productive than yesterday’s apparently rather unproductive White House meeting between Obama and Congressional Leadership. We’re in a situation now where not talking, especially about the debt ceiling, simply isn’t going to be an option for very much longer.