Once, against Justice Ruth Bader Ginsburg makes it clear she isn't going anywhere. 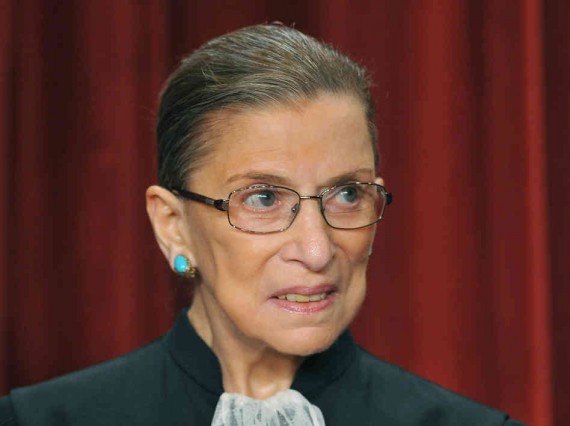 Several times over the past few years, liberal commentators have suggested, none too quietly in some cases, that Supreme Court Justice Ruth Bader Ginsburg step down so that President Obama would have the ability to appoint a successor. Given that Ginsburg is among the oldest members of the Court along with being the intellectual leader of the Court’s liberal wing, these people have argued, she should step aside to allow a younger liberal to take her place rather than risk being forced to retire when a Republican is President. Each time, Justice Ginsburg has batted down these suggestions, and she did so again in an interview with New York Times Supreme Court correspondent Adam Liptak:

WASHINGTON — Justice Ruth Bader Ginsburg, 80, vowed in an interview to stay on the Supreme Court as long as her health and intellect remained strong, saying she was fully engaged in her work as the leader of the liberal opposition on what she called “one of the most activist courts in history.”

In wide-ranging remarks in her chambers on Friday that touched on affirmative action, abortion and same-sex marriage, Justice Ginsburg said she had made a mistake in joining a 2009 opinion that laid the groundwork for the court’s decision in June effectively striking down the heart of the Voting Rights Act of 1965. The recent decision, she said, was “stunning in terms of activism.”

Unless they have a book to sell, Supreme Court justices rarely give interviews. Justice Ginsburg has given several this summer, perhaps in reaction to calls from some liberals that she step down in time for President Obama to name her successor.

On Friday, she said repeatedly that the identity of the president who would appoint her replacement did not figure in her retirement planning.

“There will be a president after this one, and I’m hopeful that that president will be a fine president,” she said.

Were Mr. Obama to name Justice Ginsburg’s successor, it would presumably be a one-for-one liberal swap that would not alter the court’s ideological balance. But if a Republican president is elected in 2016 and gets to name her successor, the court would be fundamentally reshaped.

Justice Ginsburg has survived two bouts with cancer, but her health is now good, she said, and her work ethic exceptional. There is no question, on the bench or in chambers, that she has full command of the complex legal issues that reach the court.

Her age has required only minor adjustments.

“I don’t water-ski anymore,” Justice Ginsburg said. “I haven’t gone horseback riding in four years. I haven’t ruled that out entirely. But water-skiing, those days are over.”

Justice Ginsburg, who was appointed by President Bill Clinton in 1993, said she intended to stay on the court “as long as I can do the job full steam, and that, at my age, is not predictable.”

“I love my job,” she added. “I thought last year I did as well as in past terms.”

She works out twice a week with a trainer and said her doctors at the National Institutes of Health say she is in fine health.

“Ever since my colorectal cancer in 1999, I have been followed by the N.I.H.,” she said. “That was very lucky for me because they detected my pancreatic cancer at a very early stage” in 2009.

Less than three weeks after surgery for that second form of cancer, Justice Ginsburg was back on the bench.

Justice Ginsburg said her retirement calculations would center on her health and not on who would appoint her successor, even if that new justice could tilt the balance of the court and overturn some of the landmark women’s rights decisions that are a large part of her legacy.

“I don’t see that my majority opinions are going to be undone,” she said. “I do hope that some of my dissents will one day be the law.”

It has been reported in the past that Ginsburg would like to equal the amount of time that Louis Brandeis spent on the Supreme Court, which means that she would stay on the Court until at least 2015 if not longer. Given that her health appears to be fine, and that she really doesn’t seem to care what liberal activists have to say about what she should do, there’s really no reason that she couldn’t make it that far, if not further. No doubt, there will be someone on the left who will pressure her to step down yet again in the coming years, especially as we get closer to the end of President Obama’s term. However, she’s made it clear what she thinks about those calls, and that she’ll step down when she’s good and ready.

On the general subject of potential Supreme Court vacancies, it’s worth noting that, in addition to Ginsburg, there are three Justices who have passed their 75th birthday, Justices Scalia, Kennedy, and Breyer. Scalia and Kennedy, of course, have been on the Court since the late 1980s, while Breyer was appointed one year after Ginsburg. Neither Scalia nor Kennedy have given any indication that they are looking to retire any time soon, and since they both seem to be in good health it seems unlikely that we’ll see them step aside any time before the 2016 elections absent some health issue. Although he has been on the Court less time than Ginsburg, Breyer may be a possible candidate for retirement in the next three years, but he’s also apparently in relatively good health and hasn’t given any signs of wanting to step away from the Court like Justice Souter did before he retired at the beginning of President Obama’s time in office. Moreover, replacing Breyer (or Ginsburg for that matter) would not change the ideological balance of the court at all. That won’t happen unless or until someone like Scalia or Kennedy steps aside, at which point we can be assured to be subjected to a political firestorm disguised as a Supreme Court nomination process.

In addition to commenting about her intentions for the future, the interview also contains some interesting insights from Ginsburg about the Court’s recently concluded term, as well as a point that she has made in the past:

She said that as a general matter the court would be wise to move incrementally and methodically. It had moved too fast, she said, in Roe v. Wade, the 1973 decision that established a constitutional right to abortion. The court could have struck down only the extremely restrictive Texas law before it.

“I think it’s inescapable that the court gave the anti-abortion forces a single target to aim at,” she said. “The unelected judges decided this question for the country, and never mind that the issue was in flux in the state legislatures.”

The question of same-sex marriage is also in flux around the nation. In June, the court declined to say whether there was a constitutional right to same-sex marriage, allowing the issue to percolate further. But Justice Ginsburg rejected the analogy to the lesson she had taken from the aftermath of the Roe decision.

“I wouldn’t make a connection,” she said.

This mirrors some comments that Ginsburg made during a speech in May and, notwithstanding the denial of connection, one cannot help but see that the Court’s same-sex marriage rulings this past term do seem to have been more in line with this gradualist approach than with the sweeping approach of a case like Roe. In any case, though, given her comments it seems quite likely that Justice Ginsburg will still be on the Court when it receives its next marriage equality case, and that is likely to be one that could lead to laws against same-sex marriage being struck down nationwide.