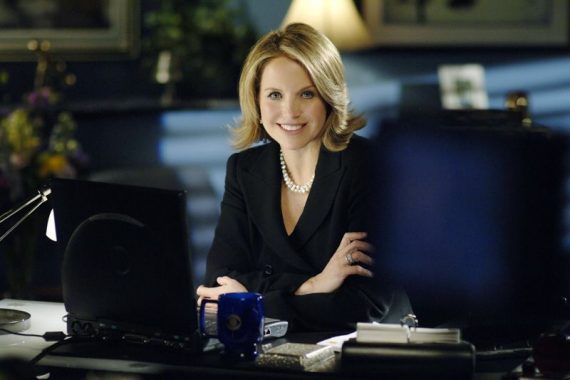 Five years after becoming the first woman to anchor a major network newscast, it appears that Katie Couric will be leaving the CBS Evening News:

After weeks of speculation in the press that “CBS Evening News” anchor Katie Couric was mulling whether she wanted to make another career change – this time to become a become a syndicated talk-show host — the Associated Press pulled the trigger on the story late Sunday, reporting Couric had indeed decided to step down from her exalted position as the First Woman to Solo Anchor a Big Three Newscast, in order to make a run at becoming The New Oprah.

The report cited an unnamed source and a CBS News rep said their talks with Couric were ongoing and they weren’t about to comment on “rumor or speculation,” to which Couric’s rep added, “Ditto.”

Couric’s contract to anchor “CBS Evening News” is set to expire in June.

Couric, for many years the darling of NBC’s “Today” show, took over as anchor of the “CBS Evening News” on a Tuesday in early September of 2006, replacing Bob Schieffer, who had been anchoring for 16 months to buffer Couric from CBS’s controversial push-out of longtime anchor Dan Rather.

A whopping 14 million people watched her debut, to see what a news anchor who’s reportedly being paid $15 million a year salary, looks like and does.

A jubilant CBS News, which had been mired in third place for ages, pointed out that this was 84 percent better than the newscast did the same night one year earlier when Rather was behind the anchor desk.

But, then-CBS News president Sean McManus issued an I’m-really-happy-but-this-is-a-marathon-not-a-sprint quote to put the numbers in perspective. And, truer words were never spoken: Couric’s newscast is these days in third place in the ratings, sitting snugly behind Williams at NBC’s “Nightly News” and ABC’s “World News” – now anchored by Diane Sawyer, the Second Woman to Solely Anchor a Big Three Evening Newscast.

There’s been talk of a CBS-Couric divorce before, of course, but this time it seems much more definite with Couric’s contract set to expire and CBS none to happy about the perennial third place finish. Of course, the other question is whether this wouldn’t be a good time to just end the nightly news broadcast entirely. With all the coverage of news on cable and the internet, it hardly seems necessary.