The line of Republicans endorsing Barack Obama is getting longer, with defense hawk Ken Adelman, who has held senior positions with every Republican president since Ronald Reagan, joining yesterday.

George Packer reprints an email exchange with Adelman in which he cites John McCain’s response to the financial crisis, which he describes as “impetuous, inconsistent, and imprudent; ending up just plain weird” and the selection of Sarah Palin for the vice presidency, which “showed appalling lack of judgment” and “contradicted McCain’s main two, and best two, themes for his campaign—Country First, and experience counts.”

While Colin Powell, Lincoln Chaffee, Susan Eisenhower, Julie Nixon Eisenhower, Jim Leach, Richard Riordan, Bill Ruckelshaus, and others can be dismissed as outside the conservative movement, Adelman can not.  Perhaps, at some point, people will take these complaints about McCain and the direction of the party seriously rather than as an excuse for character assassination.

Adelman closes his email to Packer:

I sure hope Obama is more open, centrist, sensible—dare I say, Clintonesque—than his liberal record indicates, than his cooperation with Nancy Pelosi and Harry Reid portends. If not, I will be even more startled by my vote than I am now.

It strikes me as odd, indeed, to vote for a presidential candidate who disagrees with you on the most fundamental issues in the vague hope that he’s been lying to you throughout the entire campaign. 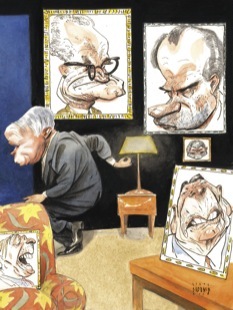