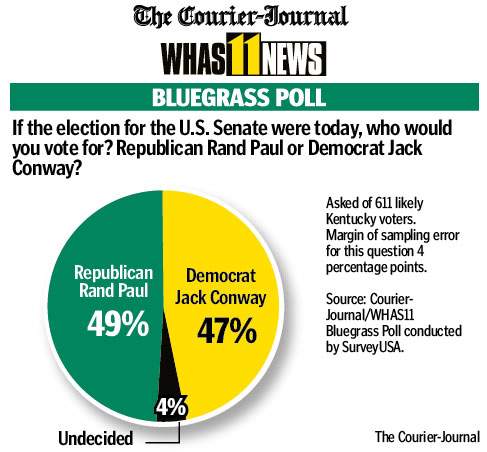 The latest poll of the Kentucky Senate race continues the trend showing Jack Conway to be well within striking distance of Republican candidate Rand Paul.

Democrat Jack Conway has cut sharply into Republican Rand Paul’s once-commanding lead in Kentucky’s U.S. Senate race, moving into a statistical tie with a little more than five weeks before Election Day, according to the latest Courier-Journal/WHAS11 Bluegrass Poll.

The poll shows that Conway, the state’s attorney general, is now appealing to voters who say they are neutral on the tea party — Paul’s base of support.

And Conway is building a significant lead among women, who earlier were almost evenly split between the two candidates.

According to the poll, Paul leads Conway 49 percent to 47 percent, with 4 percent undecided. That lead is well within the poll’s 4 percentage point margin of error.

This is one of those races that won’t surprise me to go either way. But still, the Republican candidate for Senate should not be facing this tight of a race in Kentucky. Once again, it’s possible that the Tea Party’s preferred candidate may prevent the GOP from gaining a Senate seat…